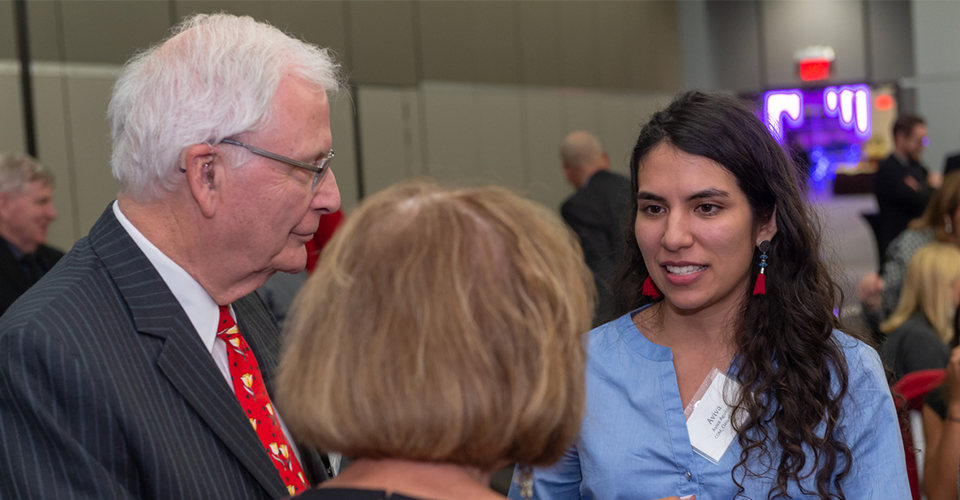 Telling the Stories Behind the Gifts

More than one big reveal came out of the Thanks for Giving scholarship dinner and donor wall unveiling held Wednesday, Oct. 23, at NEOMED.

Guests to the NEOMED Foundation event got the first look at the gleaming new donor wall located across from Watanakunakorn Auditorium – just inside the main entrance to campus.

The illuminated names on the wall reflected those who gave, and when the donors talked to the students seated with them for dinner in the Grand Ballroom, they were enlightened by the recipients of their generosity.

On top of that, donors listened with interest during dinner as selected students spoke to the group about their experiences at NEOMED and the ways that scholarships from donors had helped them.

As NEOMED Foundation Board vice chair Debbie Oakey put it in her remarks, “You inspire us!”

Before President Langell welcomed donors at the beginning of the dinner program, Bruce Sherman, chair of the NEOMED Foundation Board, and Daniel Blain, vice president of Advancement, thanked them during a cocktail hour at which they unveiled the new donor wall. The new Shine On wall displays the names of donors, and more: Through its digital capabilities, it will also be a dynamic collection of names, stories and images, continuing to grow along with support for the University.

Shine On is the name of the successful capital campaign that raised $44 million for NEOMED.

During dinner, Brian Wagner (chair of the Foundation’s development committee) introduced Aviva Aguilar, a second-year College of Medicine student, who presented the first of the many compelling stories behind the scholarships. Leaving the podium to stand closer to the group and speak from the heart, Aguilar told the riveted listeners about moving from Venezuela with her family as a child, struggling at times to keep up her grades at Case Western Reserve University while working multiple jobs to pay her bills, and finding a good fit in the NEOMED-CSU Partnership for Urban Health.

William Keck, M.D., M.P.H., was one of the first faculty members hired at the University in 1976, when he accepted a joint appointment to teach the first community medicine courses while also serving a joint appointment as director of Public Health for the City of Akron (Ohio). It was during his tenure that the multi-institution Consortium of Eastern Ohio Master of Public Health program was formed – and continues to run, under the leadership of Amy Lee, M.D., M.P.H.

Dr. Keck said in his dinner remarks that it is out of gratitude for NEOMED’s part in a public health career that has been extremely meaningful to him – and to encourage the University to continue to champion public health and the underserved – that he and his wife, Ardith, have named NEOMED in their will through a planned giving program and therefore, were charter members of NEOMED’s new Legacy Society, which recognizes donors who have made planned giving arrangements with the University.

An evening for thanks

Whether it was Foundation Board secretary Paul Watanakunakorn, M.D. (’98), speaking about the recently launched Medallion Scholars program by which donors can establish scholarships and receive matching dollars from the NEOMED Foundation for their contributions; the comments of Rural Medical Education (RMED) Pathway student Jordan Johnson; or the uplifting statements by two College of Pharmacy students, Taylor Craigo and Madison Ordonez, who volunteer at the SOAR Student-Run Free Clinic, the message that evening was clear: NEOMED’s students and donors are grateful for each other.