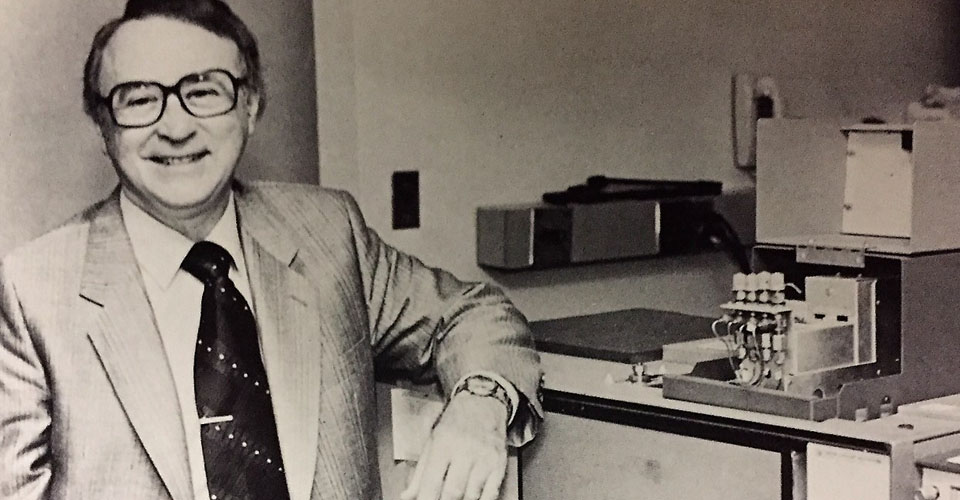 The College of Medicine Pays Tribute to Dr. Ferenc Hutterer

Ferenc Hutterer, M.D., Professor Emeritus and the first chair of the NEOMED (formerly NEOUCOM) Department of Biochemistry and Molecular Pathology, will be remembered in a tribute to his life on Wednesday, Dec. 6 in the Bitonte Atrium from 2-4 p.m.

Dr. Hutterer was born in Szeged, Hungary in 1929. In 1944, as a teenager, he and his family were sent to a concentration camp, where they had to endure 12 hours of labor each day. Toward the end of World War II, the family escaped the camp, living in caves and barns to survive.

He eventually returned to Szeged and attended medical school at the University of Szeged. While attending school, he worked in the lab of Nobel Prize-winning biochemist Albert Szent-Gyorgyi and developed a love for biochemistry. He also aspired to be an opera singer, taking voice lessons at a music conservatory where he met his wife Maria, who was training as a classical pianist. The Hungarian Revolution of 1956 forced him and his family, which now included son Richard, to leave for New York City. He spoke often about his life in Hungary and those close to him knew the importance of those experiences.

While in New York, he was professor of pathology and director of the Department of Chemistry at Mt. Sinai School of Medicine, City University of New York. In December 1975, NEOUCOM’s first provost and one of its founding fathers, Dr. Stanley Olson, hired Dr. Hutterer to be the first program chief and professor of molecular pathobiology and eventual chair of biochemistry and molecular pathology at the newly formed NEOUCOM.

Dr. Hutterer loved medicine, music and scientific research­, all of which he pursued and explored at NEOUCOM. He established a case-based biochemistry course, innovative at the time it was developed, which related biochemistry to medicine. His passion for opera led him to teach the course Opera in Medicine, one that was very popular among students.

Those who worked closest to him said his work in liver research will be his legacy at NEOMED.

“As the founding chair of biochemistry, he had this vision and ambition to make NEOUCOM a leader in liver research,” said Distinguished Professor Dr. John Chiang, hired by Dr. Hutterer in 1978. “Thirty years later, we are still focused on this research which has become so important to the understanding of the liver, metabolism and liver diseases.” Dr. Hutterer retired from NEOUCOM in 1996.

Former students of Dr. Hutterer have called him “influential, encouraging and a great educator.” Duane Taylor, M.D. (’85), said of Dr. Hutterer, “I truly appreciated Dr. Hutterer. He was an excellent professor and great person whose biochem teaching provided a very clear path from basic sciences to clinical diseases. It was professors like him that made me really appreciate my medical school experience there and prepared me.”

Joseph Zarconi, M.D. (’81), recalled Dr. Hutterer with a smile, stating that he had a bit of a reputation among the charter class as “a little dictator,” who was tough on students because “he held each of us to very high standards.” Zarconi went on to say that “Dr. Hutterer cared deeply about the school and cared deeply about his students, wanting us to seek excellence in our studies and ultimately as physicians.”

The Ferenc Hutterer, M.D., Seminar Series in Liver Research will be established in the College of Medicine in honor of Dr. Hutterer.