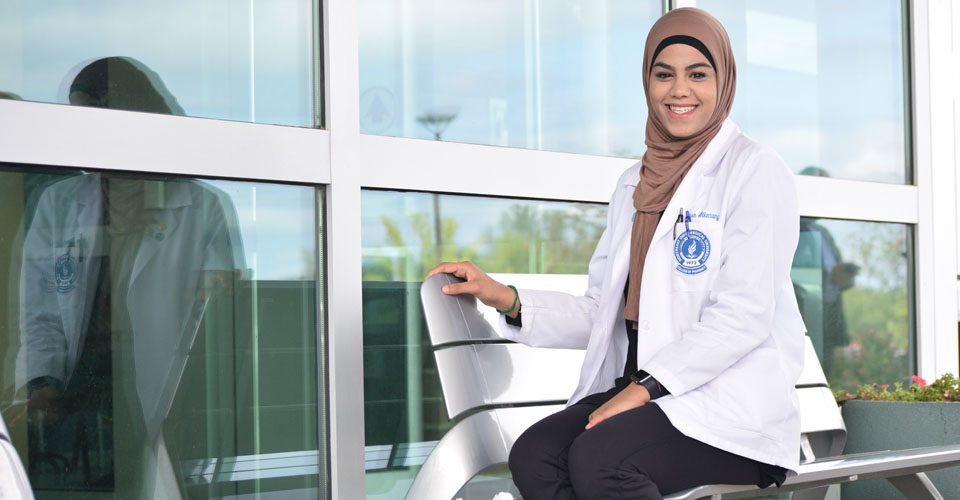 The Power of Positivity in Pharmacy: Nuur Alkenany

For years, Nuur Alkenany planned to be a pediatrician. It wasn’t until she took a job at CVS as an undergrad that she considered pharmacy as a career.  And even after working at a pharmacy for three years, while an undergraduate at Madonna University, a small liberal arts university in Livonia, Michigan, Alkenany still planned to pursue pediatric medicine.

“I love children and I love working around them,” says Alkenany, now a second-year Northeast Ohio Medical University College of Pharmacy student. Although she made the switch to pharmacy, Alkenany still hasn’t let the idea of pediatrics out of her sight. She hopes to pursue a residency at a children’s hospital.

While exploring her options for pharmacy school, Alkenany carefully rated schools by their student-to-teacher ratio and North American Pharmacist Licensure Examination (NAPLEX) passing rate. One other thing not so easily measured appealed to her about NEOMED: The array of stress-relieving options it provides students.

“NEOMED was my first choice. I love that it offers counseling options, meditation and even yoga classes. They know we’re going to be stressed, so they offer us many ways to relieve that stress and let us know that everything is going to be OK,” says Alkenany.

The University has a number of resources dedicated to students who feel depressed, stressed or burned out. The Center for Student Wellness and Counseling Services is available during office hours and after hours. Students are also encouraged to visit Sequoia Wellness and try out the new massage chair in NEOMED’s meditation room.

“It was such a change coming to Northeast Ohio after being around my big family in Michigan my whole life. I was worried that it would be quiet and isolated, but it’s not. Everyone makes it feel like home,” says Alkenany.

She serves as the vice president of the Walking Whales Cooking Club and is an active member of the Pediatric Pharmacy Advocacy Group, Muslim Student Association, Persian Student Association (Fun fact: Alkenany is half Iraqi and half Persian) and Student Society of Health-System Pharmacists.

She was also recently nominated by her peers to be a student coater for the 2018 College of Pharmacy White Coat Ceremony, held on Monday, Sept. 17.

If you ask Alkenany what’s special about NEOMED student organizations, she’ll likely tell you how much she enjoys volunteering.

Last year, she volunteered with NEOMED’s chapter of Student Society of Health-System Pharmacists to donate and decorate a Christmas tree for a family in need.

“It was such a nice experience. I loved every minute of it and would definitely do it again,” she says.

Keep your head up

Alkenany has always been determined, but that doesn’t mean pharmacy school has been a breeze, she says:  “When I came to pharmacy school, I believed it would be like undergrad. I had the same mindset for studying as I did in undergrad, but it didn’t work.”

She has found ways to manage the demands: “Don’t panic, just make sure you keep up with the pace,’’ she says.

“I’m not going to lie, I fell behind a couple times and have hit a few bumpy roads along the way, but as long as you pick yourself back up, you’ll be fine,’’ says this outgoing second-year. Her advice for incoming and first-year students? Find the study strategy that works best for yourself, then stick to it.