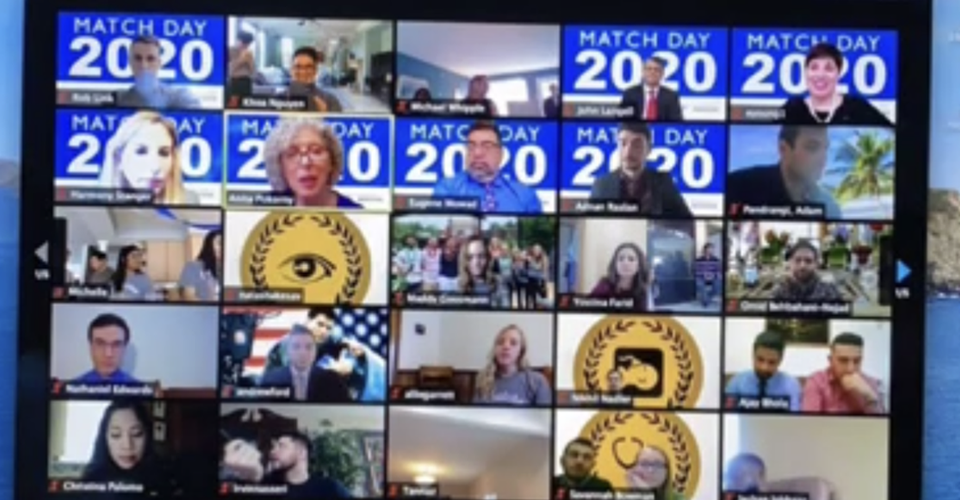 Exhilarating. That’s how fourth-year College of Medicine student Cynthia Pung described the feeling of participating in Match Day – when fourth-year medicine students across the country learn where they will do their residency. Because of the COVID-19 pandemic, it wasn’t possible to bring together family and friends with students on the NEOMED campus as usual, so the College of Medicine found an online solution to celebrate in a new way Friday, March 20.

In an online event that began 30 minutes before the nation-wide noon delivery of emails to students, the fourth-years gathered with family and friends at their individual homes, while President Langell and College of Medicine leaders checked in online.

At the stroke of 12, students received their emails and home viewers could watch a video of photos from the students in their younger years. At 12:15, the real party began, when one by one (by the spinning of a wheel), each student came on via video to announce where they had matched.

Maybe the most popular phrase was “I matched at my first choice, XYZ hospital,” followed by hugs and hoorays by family and friends, who could be seen in the backgrounds of living rooms and kitchens.

On campus, cheers could be heard from behind the closed doors of a conference room (near the lobby where the live celebration usually happens afterward), where a small group of students – observing social distancing!) -- had gathered.

In the neighborhood and in the nation

In all, 134 students matched at institutions near and far. Northeast Ohio residencies include Summa Health and Children’s Hospital in Akron, Cleveland Clinic (in Cleveland and Akron), Aultman Hospital in Canton, St. Elizabeth Hospital in Youngstown, and MetroHealth Medical Center and Case Western/University Hospitals in Cleveland.

Pung announced that she will do her residency in internal medicine at Summa Health in Akron.

“It’s been a dream of mine to serve the community that served my family when they came from Cambodia as refugees. I’m really glad that we found a way to get everyone together and still spend this special moment together,” she said in an email after the event.

“I remember going to Match Day for the upperclassmen and feeling a sense of awe that one day it would be me walking up to that podium and announcing where I matched. There’s no podium this year but the sense of awe and excitement is still there!”

In keeping with the four years of humanities curriculum for College of Medicine students, humanities faculty Rachel Bracken, Ph.D., and Austin Frederickson, M.D. (’14), arranged for one more way to commemorate Match Day: by a video of a group reading of a poem that is a NEOMED tradition and a favorite of Joseph Zarconi, M.D., (’81), a leading force behind the Human Values in Medicine curriculum.

From their individual locations, faculty and students read a line apiece from the poem “Gaudeamus Igitur” by John Stone, then the recitations were edited together for one complete reading.

The fourth-year students each received a link to the video from Drs. Bracken and Fredrickson, acknowledging all that they have accomplished during their time at NEOMED.