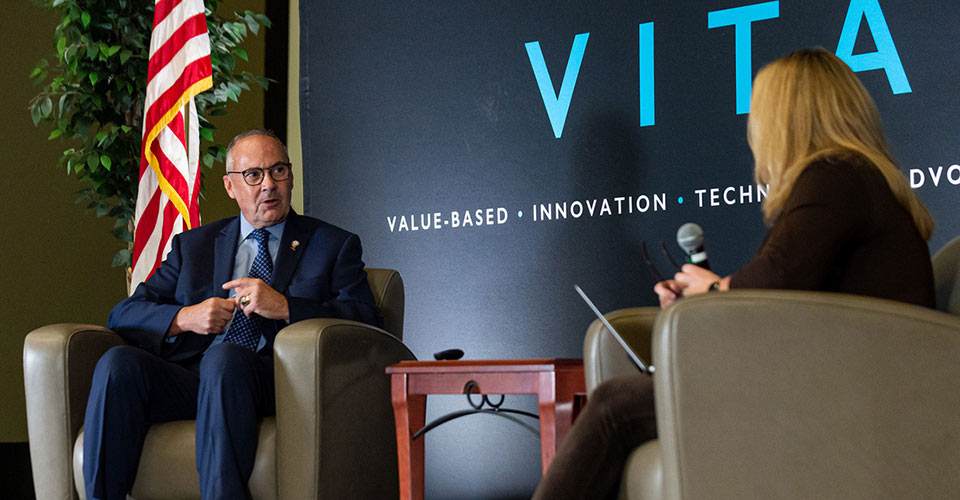 Does care stop at the front door of the medical center or health provider’s office?

That’s one of the tough questions posed by Forrest Faison III, M.D., during the Nov. 10 VITALS program.

Dr. Faison, retired vice admiral and 38th surgeon general of the U.S. Navy, addressed an audience in person in Watanakunakorn Auditorium and via Zoom in a special VITALS program held as part of NEOMED’s Creating Transformational Leaders Day.

The focus of Dr. Faison’s remarks was on the care of (or lack of care of) the country’s “wounded warriors,” a fitting topic for a program held the day before Veterans Day “You heard about wounded warriors during Iraq and Afghanistan conflicts,” noted Dr. Faison. “We don't hear so much about them today.”

He noted that during the conflicts in Iraq and Afghanistan, the U.S. had the highest combat survival rate in recorded history. “And we have data going back to the Revolutionary War. If you had a survivable injury on the battlefield, you had a 97% chance of survival. We were routinely saving men and women who would have died in any previous conflict,” Dr. Faison said. “These are young men and women in their early 20s, late teens who came home alive and with their entire lives ahead of them -- 97% combat survival. The nation spared no expense to care for them [during their recovery].

“So what happened to them?”

The statistics are grim:

“As we do longitudinal studies, we’ve found if you have untreated PTSD, you have a 200% increased risk of developing chronic disease because you don't take care of yourself. And so a lot of the challenges are ahead,” Dr. Faison noted.

“So what should their future look like? What should the future of wounded warriors look like for them and for their families? What is our national strategy to achieve that future? And what's the role of the government and of industry and of the medical profession and community leaders?” he asked, adding, “Of all the people that I asked over about the 10 years that I was a flag officer in the Navy, no one could answer these questions. So what does that mean? There is no plan.” Dr. Faison challenged the audience to consider those questions for wounded veterans and all vulnerable populations.

“Think about that tomorrow during Veterans Day and then expand your thinking. To think about all the other Americans who need our help today. That's the challenge of medical leadership in the future.”

Following Dr. Faison’s remarks, he was joined on stage by WKYC senior health correspondent Monica Robins, who moderated a Q&A with the engaged audience.

See what’s next on VITALS