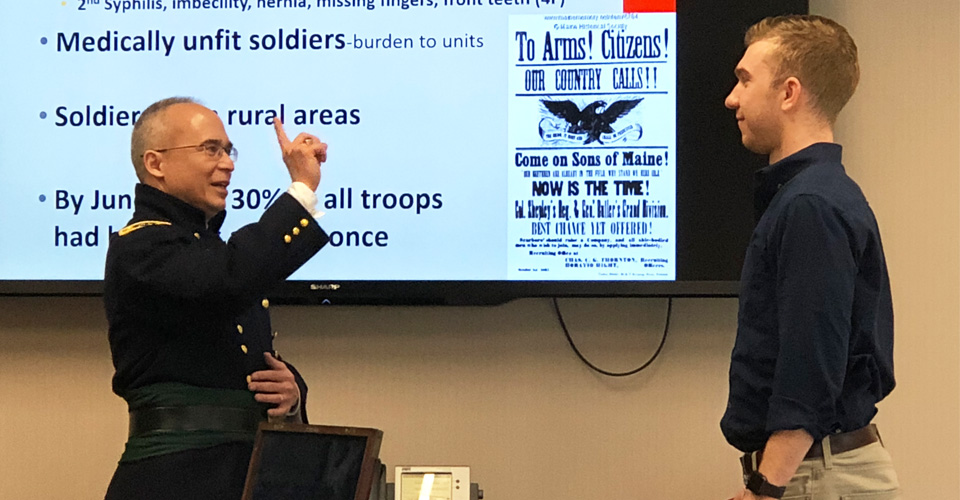 True or False: Anesthesia was not used for surgery during the Civil War.

Fourth-year College of Medicine students taking a War and Medicine elective now know the answer to that common misconception, thanks to Fred Marquinez, M.D. (’85), clinical associate professor of internal medicine. Roger Vazquez, M.D. (’85), clinical associate professor of pediatrics, who teaches the class, invited his former classmate, Dr. Marquinez, to the first class.  Dressed in Union army military regalia for the occasion, Dr. Marquinez dispelled myths and brought to life the practice of medicine during the Civil War.

When fourth-year students take humanities electives such as this to round out their education, it pays off, said Dr. Vazquez after class. “When I was in school, some of the things we thought were fluff, or touchy-feely, have been the most important, like the ability to speak with people, to relate to patients and to make them comfortable,’’ he says.

Throughout history, technological advancements have happened during wartime. So have medical advancements, Dr. Marquinez explained to the class. The Ravenna hematologist/oncologist brought with him archival items like bullets, photos and medical equipment for the students to pass around during class and examine afterward.

Prior to the Civil War, surgery was rarely performed. Many of the physicians in the war had probably never seen an amputation before having to perform one themselves, Dr. Marquinez said.

Two of the students taking the class are currently commissioned in the military; a third is a veteran. Ben Genco, who is commissioned in the Army, was the good sport who volunteered for a mock examination to determine his physical fitness to serve in the Civil War army. After class, he commented, “As a soon-to-be Army doc, I found it interesting to hear how the military had played such a pivotal role in medical advancement throughout history.’’

Over the course of three four-hour classes, Dr. Vazquez will also take students through a mock game in which only one student can survive in the wilderness, as a way of talking about what items in the wild are edible and gaining insights into military rations. On a visit to the MAPS Air Museum in North Canton, students will have the chance to talk one-on-one with veterans of Pearl Harbor, the Korean War and Vietnam.

What might be the future needs of aerospace medicine? That’s another topic of discussion.

“The class is a way to feed students’ curiosity about how medicine advances and we develop tools to fit our needs. If the class piques their interest, maybe it will encourage them to find the next invention that advances medicine,’’ says Dr. Vazquez.

What does the term 4-F stand for, and where did it come from?

Where did the term sideburns come from?

What was the bloodiest battle in American history?

What was the most common ailment among soldiers during the Civil War?

What Civil War-era healing technique did swimmer Michael Phelps use before the last Summer Olympics?