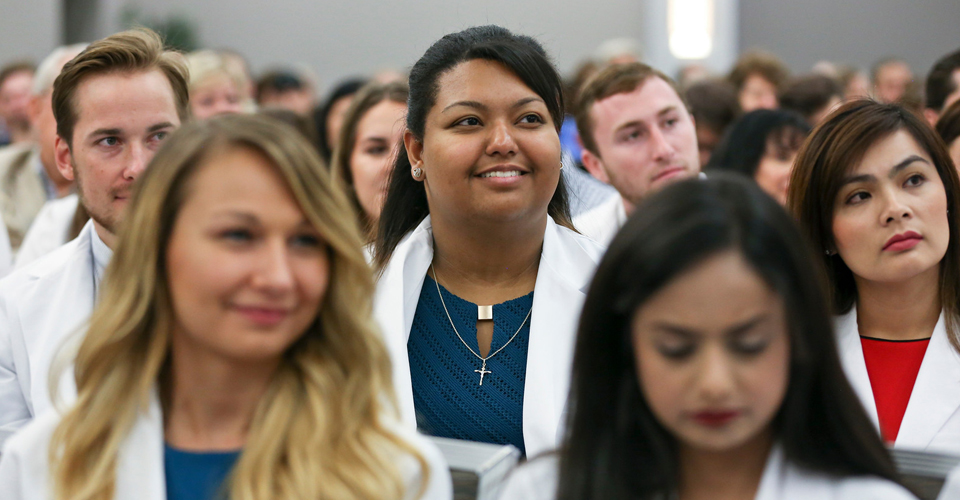 Be adaptable, and always put the patient first.

And remember the three advantages of wearing a white coat: It has pockets to hold everything you need; it covers wrinkled clothing to give you a professional and trustworthy appearance; and it shields you from the bodily fluids that you’re going to encounter on the job. (Get ready!)

With that advice and more, students took their oaths and donned white coats on Monday as the Classes of 2021 in the College of Pharmacy and the College of Medicine.

President Gershen introduced each event (morning for the College of Pharmacy; afternoon for the College of Medicine, both live-streamed), asking for a moment of silence to acknowledge the terrorist attacks on Sept. 11, 2001 and to show concern for the many people affected by Hurricane Harvey and Hurricane Irma.

The keynote speaker for the College of Pharmacy, Scott Knoer, Pharm. D., is a clinical professor of pharmacy and chief pharmacy officer of the Cleveland Clinic. While those are impressive credentials, just as important on this occasion was his role as the father of Alexander Knoer, a first-year student. Dr. Knoer watched proudly with other parents, family and friends (including Sue Fosnight, R.Ph., associate professor of Pharmacy Practice, whose son Steven is also in the class) as the future doctors of pharmacy crossed the stage, one at a time, to be ceremonially robed.

Dr. Knoer advised the 74 students to never think of their profession as a job but rather an amazing opportunity in which they should always put the patient first. Later in the program, alumnus AJ Caraballo, Pharm.D. (‘13), encouraged them to act as advocates for their patients, and for their new profession. Elisabeth Young, M.D. (’85), interim vice president for health affairs and interim dean of the College of Medicine, built her remarks to the 160 members of the Class of 2021 around the reasons for the white coat. Her comments were down to earth, with a touch of humor, but she also observed more seriously the qualities that a white coat suggests: competence; capacity for compassion and empathy; and commitment to service.

“When students wear it, they should think beyond themselves, concentrating on being respectful, reliable, truthful and trustworthy,” said Eugene Mowad, M.D., the 2017 College of Medicine Dean’s Leadership Award winner.

Not only is it an honor to receive the traditional white coat; it’s also an honor to present it. After the ceremony, Paul Orefice, College of Medicine Class of 2019, said that it felt really special to be selected by his peers as one of the student coaters onstage. Orefice the first in his family to become a physician, as well as a first-generation college graduate.

“My youngest son is autistic and I’m a single dad, so I used to keep to myself quite a bit. I decided I wanted to make myself more available, because someone here may be going through the same things I am, and I hope I can give them something,’’ said Orefice. “In medicine, we’re always trying to do what’s best for the generation behind us.’’ Brenda and Barbara Eruo, twin daughters of Frederick Eruo, M.D., associate professor of obstetrics and gynecology, received their white coats from the College of Medicine.

Vihanga Perera’s mother, Lilani, was beaming at the reception afterward, thrilled that her youngest daughter is following in the footsteps of sister Shani Perera, a 2017 graduate of the College of Medicine. Lilani Perera said what she wants most for her children is the satisfaction she herself feels as a nurse who helps people: “When you go home, you feel good!’’