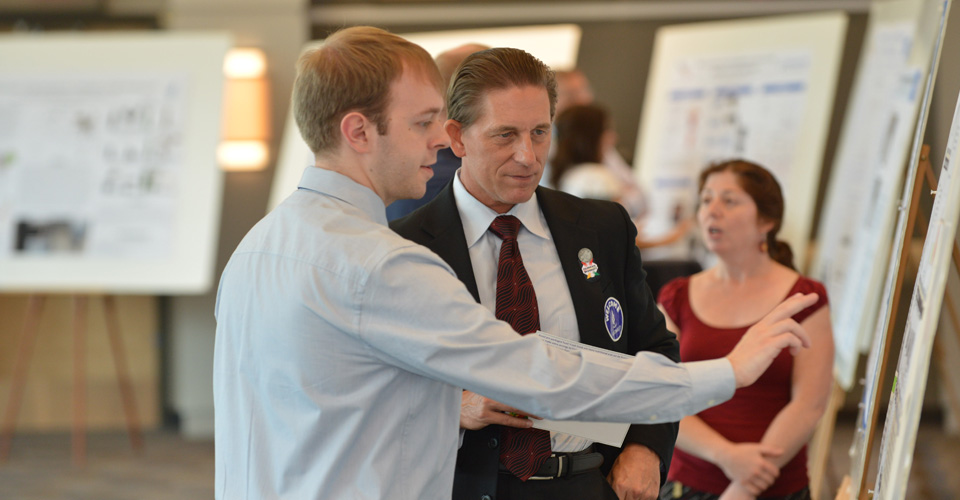 It is with mixed emotions that I announce that Walter Horton is embarking on a new direction.

After 16 years of service to the NEOMED community, Walt has accepted an offer from Texas State University as the associate vice president for research and federal relations. Texas State University is one of the country’s largest (31st) universities with an enrollment of 39,000 students. Walt will report to the provost of Texas State, which has 11 colleges and was recently designated an emerging research university with $47M of total R&D expenditures in 2015.

Walt has been a champion of the health sciences and research, as vice president for research and dean of the College of Graduate Studies; a champion of diversity, as chair of the Diversity Council; and as you know, champion of health and wellness, including his personal 30-year plus commitment to competitive ice-dancing.

But it is your very first encounter with Walt, and consistently each encounter thereafter, that is most representative of who Walt is: a champion of people. And so, it doesn’t surprise me that another institution sees those qualities as well, for you only have to meet him once to know he’s someone special.

During his tenure, Walt led the transformation of NEOMED’s research program to a nationally renowned research and commercial enterprise. He came to NEOMED in 1999 as an associate professor in the Department of Anatomy and led an NIH funded program in the area of arthritis research for over 10 years.  In 2008, following a national search, he was appointed as vice president for research and in 2010 as the founding dean of the College of Graduate Studies. During Walt’s career at NEOMED, the University experienced historic growth in its research and sponsored programs portfolio, expanded the physical footprint to support research, and identified 3 additional research focus areas. Walt worked with many others to build the REDIzone and grow commercialization. And when the College of Graduate Studies was identified as a key component of the University strategic plan, he led its growth from concept to the conferral of degrees in all programs.

As the chief research officer of Texas State University, Walt will oversee the entire infrastructure supporting research and sponsored programs including pre and post-award, compliance, faculty research development, commercialization and industrial relations. Walt will also have responsibility for the six designated University Centers including the Texas School Safety Center and the Meadows Center for Water and the Environment. He will oversee the development of STAR Park (Science, Technology and Advanced Research), a 58 acre site that houses the fully built out STAR One facility with 20,000 s.f. of laboratories to support companies working in the materials, chemistry and life sciences as well as maker space, collaborative conference space, and support functions. STAR Park is one of only three academic research parks in Texas.

We will miss Walt’s friendship, his talent, his kind words and his smile. We wish Walt and his wife, Sara Carlson, the best in their new endeavors. (His son Dan Horton will remain in Northeast Ohio.)

Walt starts at Texas State on August 15, 2016. He will remain with us through July.  Please look for an announcement of a farewell reception.

Interim appointments will be announced in July and a national search will begin this summer for a new vice president for research and dean of the College of Graduate Studies.

Take a share your farewells, best wishes, memories and experiences with our friend, Walt, below: