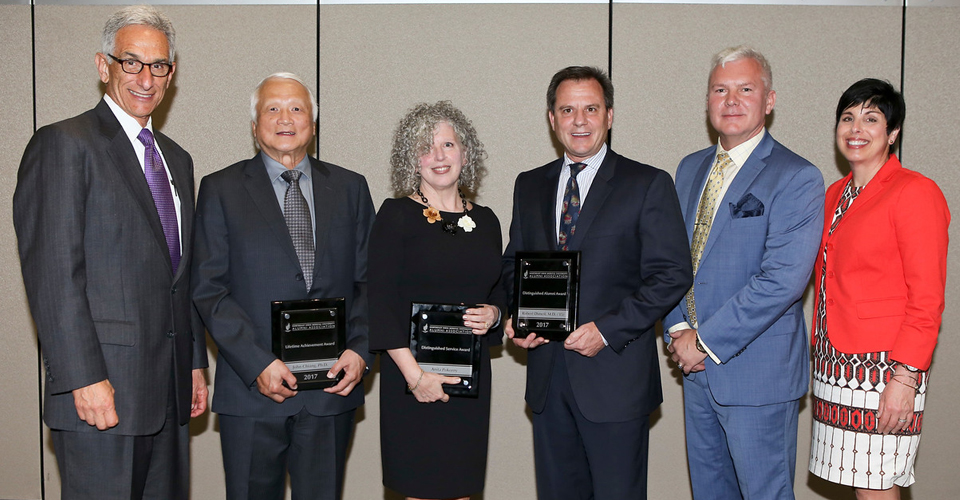 Reconnecting was the theme earlier this month when NEOMED alumni, staff and friends gathered for an alumni reunion and awards dinner honoring three of NEOMED’s own. Mark Hostettler, M.D. (’84), welcomed the group that gathered at the NEW Center Grand Ballroom to enjoy each other’s company and salute the evening’s award winners. President Gershen thanked the attendees for the many ways they help NEOMED to succeed—as clinical faculty, as mentors, and as loyal advocates who support NEOMED through philanthropy.

A common thread in conversations over the evening was the sense of community that links NEOMED graduates, no matter the distance that may separate them.

Anita Pokorny, an assistant professor in the Department of Family and Community Medicine and the director of NEOMED’s Career Center, was presented the Distinguished Service Award. Under her direction, the Career Services program has been honored for its excellence by the Association of  American Medical Colleges.

John Chiang, Ph.D., a professor of biochemistry and molecular pathology in the Department of Integrative Medical Sciences, has been internationally recognized and funded for more than 30 years by the National Institutes of Health for his research in the mechanism and regulation of bile acid and cholesterol metabolism in diabetes, obesity and liver diseases. Dr. Chiang received the Lifetime Achievement Award.

This year’s Distinguished Alumni Award went to Robert Dimeff, M.D. (’85), a sports medicine specialist who is the director of primary care sports medicine at the University of Texas Southwestern Medical Center in Dallas and team physician for organizations including the NHL Dallas Stars. Dr. Dimeff noted the impressive growth that has taken place on campus since his last visit many years ago. He recognized and thanked five of his classmates who had attended the reunion in his honor.

In a notable “first” for the Alumni Association, it recognized Sarah Hill, Class of 2018, as the inaugural recipient of the new Alumni Association Shine On Endowed Scholarship. Hill, currently completing a residency in General Surgery, has been the model of an active, engaged student. She has participated in many student interest groups, been involved in research projects on infant mortality, worked for the Blue Fund and helped fellow students as a peer mentor.