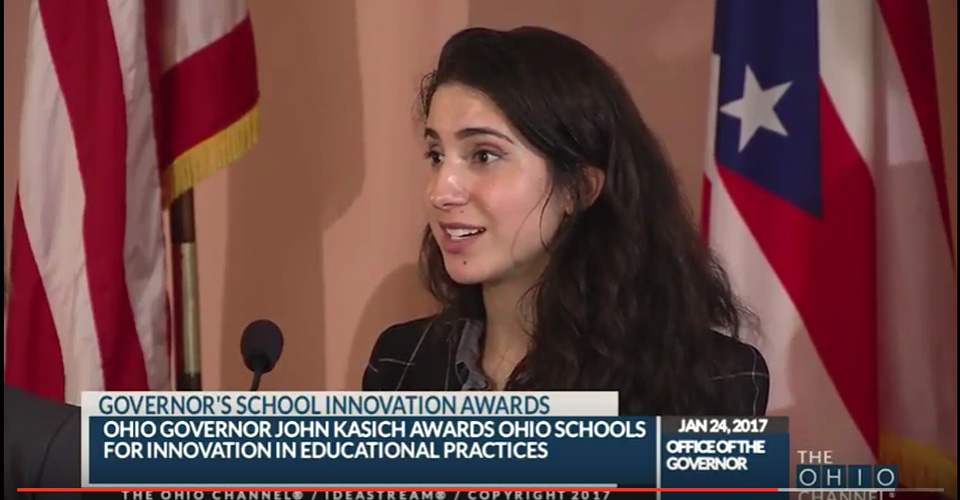 Bio-Med Science Academy was honored Tuesday, Jan. 24 by Gov. John Kasich during the Governor’s School Innovation Awards event held at the Ohio Statehouse. It was one of just seven schools to be recognized with the award.

Stephanie Lammlein, chief administrative officer of the Academy, along with teacher Candace Hisey and 10th grade student Cody Clark, accepted the award from Kasich, who praised the school’s innovative methods throughout the three-hour program. Kasich specifically recognized the school’s flexibility for students within its curriculum, stating he would like to see this model applied throughout other districts in Ohio.

With the support and resources of NEOMED, the Academy is the first rural STEM school in Ohio and the first STEM school in the nation to be located on the campus of a medical university. Curriculum is based on current trends in science and medicine, as well as on the research and education being conducted at NEOMED. Faculty from NEOMED and other local colleges and universities—as well as professionals from engineering, science, biomedical and other companies—provide lectures and serve as project advisors.

Bio-Med, which opened its doors in 2012, is one of just 19 high schools in the state to receive a perfect report card of all “A’s” in 2016 by the Ohio Department of Education. In the past, the Academy has also been recognized by the Department as the state’s top-achieving STEM school and top-achieving high school in Portage County.