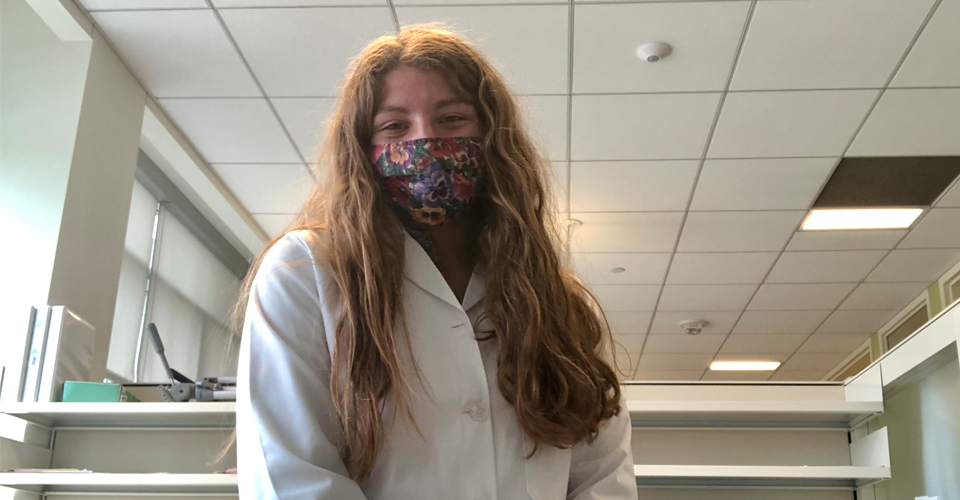 Throughout this academic year, Bio-Med Science Academy senior McKayla Pizzute has been working as an intern in the NEOMED Behavior Neuroscience Laboratory under the supervision of Sheila Fleming, Ph.D., assistant professor of pharmaceutical sciences.

For the past several months, McKayla has been learning about neuroscience and behavioral dysfunction in Parkinson’s disease (PD) with the goal of finding an effective therapeutic treatment for the most common movement disorder. McKayla has been studying some rather special test subjects - rats -  to determine the effects of exercise on this neurodegenerative disease.

Although initially surprised at how welcoming her colleagues were to collaborate with a high school student on active medical research, she notes that having a position in NEOMED has been a great experience due to the helpful staff and positive work environment.

Her day-to-day routine consists of active lab work, gathering quantitative data on the effect of exercise on motor function, cognition, olfaction, and neuropsychiatric function in the Parkinson disease rat. As of late, McKayla and lab members, Dr. Ashley Davis, Josephine Lepp, and Edward Hamad have been observing rats as they run on a treadmill for a set amount of time Monday-Friday for eight weeks. Behavioral testing  is then performed and recorded at the end of the eight weeks to see if exercise can improve Parkinson disease-like symptoms in the rats including impairments in movement initiation and reduced attention. McKayla reviews these videos and scores specific behavioral outcomes such as counting hindlimb steps made while in a cylinder, investigation of novel and familiar objects, and time spent in the different arms of a maze.

When asked what has made her experience important she says, “It's an opportunity that I definitely wouldn't have had in high school given any other scenario.” By attending a high school with a STEM+M-based curriculum, McKayla has been able to make advancements towards her future educational and career paths.

As McKayla aims to ultimately become a surgeon, this opportunity aligns perfectly with her passion for science. Her time working in the lab has allowed her to obtain a deeper understanding of the scientific process beyond what is taught in the classroom. McKayla’s participation in active medical research will help her in the fall while she attends Ohio State University to major in biomedical engineering while on a pre-med track.

This story was written by Blessing Mupinga, a senior at Bio-Med Science Academy and intern in the Office of Marketing and Communications.