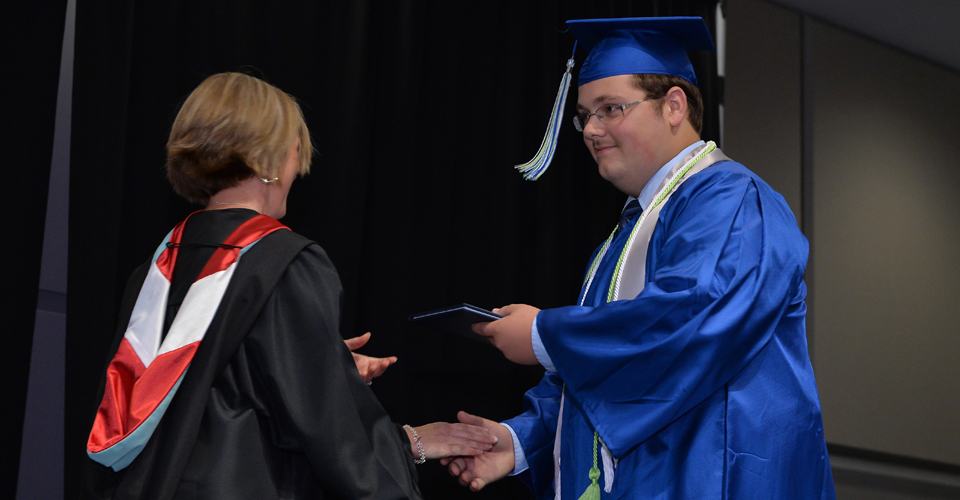 Like many high schoolers, Chris Jones used to have a hard time answering the question, “What do you want to do for the rest of your life?” That changed when he won the NEOMED  Brain Bee competition, where students ages 14-18 test their neuroscience knowledge. The 2017 Bio-Med graduate advanced to the national tournament and placed fifth in the 2017 competition. While Jones had been interested in neuroscience all his life, his success at the national level solidified his professional goals.

“It gave me a sense of absolute certainty as to what I wanted to do,” Jones said from his dorm at Baldwin Wallace University (a NEOMED partner), where he is studying both biology and neuroscience. Participating and placing in the Brain Bee helped Jones receive a scholarship to the institution, making his dream of becoming a neuroscientist a reality.

Dana Peterson, Ph.D., associate professor of anatomy and neurobiology, organizes the Brain Bee. Her support and interest exerted a profound positive influence on Jones, who said, “I thank Dr. Dana Peterson for inspiring me to become a neuroscientist.”

Through his involvement in the Interdisciplinary Neuroscience Society at Baldwin Wallace, the college freshman is working on developing a gustometer—a machine that uses stimuli to test whether a rat can sense a certain taste. When he is not programming taste-bud testing machines, Jones takes chemistry, biology and neuroscience classes, all of which have covered some material he already knew due to his involvement in the Brain Bee.

Jones said, “It is amazing how much background knowledge I have. For example, in biology class at BW, when the topic of cellular signal transduction pathways came up, I could explain it to the class, since it was one of the topics I studied at Bio-Med and the Brain Bee.”

Tutoring sessions provided at NEOMED were hugely helpful to Jones, who explained, “These sessions were highly involved and invaluable to my success in the Brain Bee. I studied brain and spinal cord specimens that I could not have gotten anywhere else.” The specimens were a part of the wet lab tutoring sessions organized by Dr. Peterson—sessions where students work with real organs to gain a deeper understanding of how the brain works.

Experiences like the wet lab not only helped Jones decide to become a neuroscientist, but also brought him in direct contact with NEOMED professors and other professionals in the field.