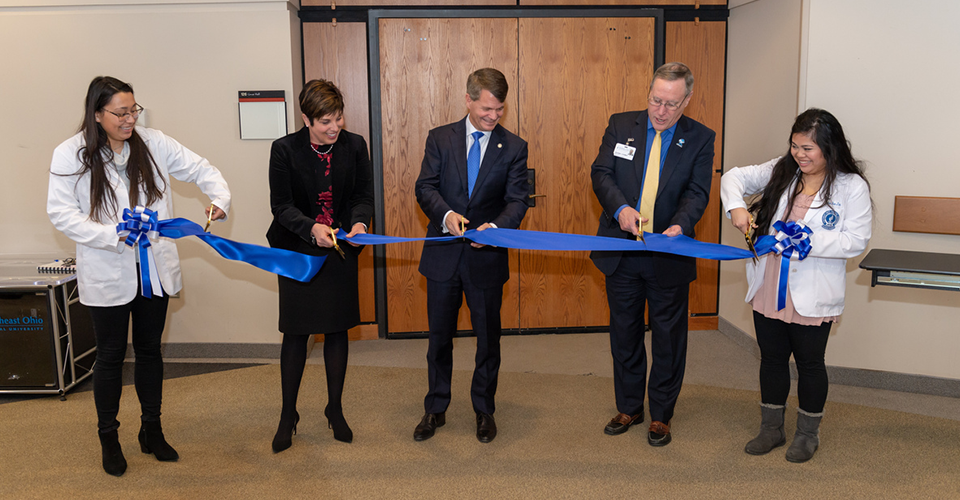 A ribbon-cutting made it official: On Friday, Jan. 17, Richard Kasmer, Pharm. D., J.D.,  vice president of Academic Affairs, welcomed students, faculty and staff to the South Corridor to celebrate the completion of its first phase of renovation and a state-of-the-art learning setting for medicine, pharmacy and graduate students.

Just before remarks by President Langell, students exited the large classroom area formerly known as the Great Hall and Training Room, giving attendees a peek into the new cutting-edge space. After the remarks, cake was served and attendees, including Elisabeth Young, M.D., dean of the College of Medicine, moved inside the classroom area, where six giant screens are now positioned around the perimeter of the room, complementing the views from the individual computer stations. Dr. Kasmer, dean of the College of Pharmacy, said that the room’s functionality is much improved. For example, in a Principles of Medicine unit on cardiology, the instructor could create six different cases if they wished, instead of having all of the students view the same case.

Architect Dave Pelligra, who was on hand, said that the biggest challenge of the job had been settling on the arrangement of the desks, since the power source was installed underneath the floor. “I told them that no one can rearrange the furniture now,” Pelligra joked. Those walking around to admire the new setup noted the design of the desk chairs, which have a built-in shelf under the seat to accommodate backpacks, coats or purses.

Not only have sightlines been improved in the room, the architect noted. Acoustical tile was also installed in the ceiling to make it easier for everyone to hear.