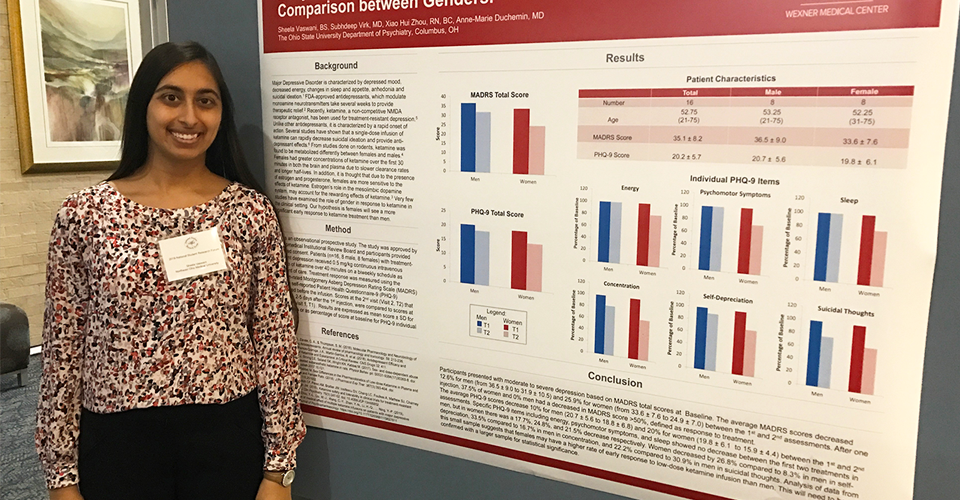 Congratulations to Sheela Vaswani, a College of Medicine candidate in the Class of 2021, whose research on gender differences in the use of ketamine to treat depression won recognition at two recent conferences!

Vaswani has been conducting her research in the Department of Psychiatry and Behavioral Health at The Ohio State University.

When she attended the National Student Research Forum in Galveston, Texas April 18-19, Vaswani was among medicine students from throughout the U.S. and Canada. Her poster titled Early Response to Ketamine Infusions for Depression: Comparison between Genders was named best poster in the Pharmacology and Toxicology category.

From March 30-31, Vaswani  attended the Ohio Psychiatric Physicians Association annual conference in Columbus, which drew medicine students, residents and psychiatrists from all over Ohio. There, her poster titled Repeated Ketamine Infusions for Depression: Differences between Genders won second place overall.

Ketamine’s Use for Treating Depression

Vaswani comments, “The FDA recently approved the use of ketamine for treatment-resistant depression. Although many different studies have been done with ketamine, there are still many questions to be researched and I am grateful for the opportunity to be on the front lines of that research. Depression is very serious. The patients turning to ketamine treatment have tried everything else and unfortunately nothing has worked for them, so imagine how debilitating life would be for them.

“Ketamine is a rapid-acting antidepressant and patients start feeling better just after one or two treatments, as opposed to SSRI’s which take at least four to six weeks before patients even start noticing effects. My sample size of patients is small right now, but analysis of the preliminary data shows females respond better and faster to ketamine than males, due to their higher levels of estrogen.”