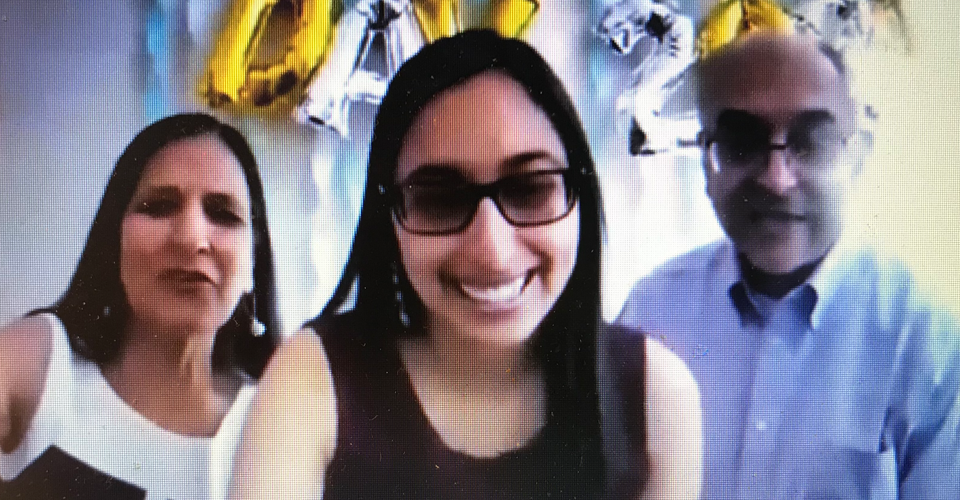 The anticipation was high as fourth-year College of Medicine students waited for the clock to strike noon.

Per tradition, 138 NEOMED medicine students waited to learn their residency match. The email arriving precisely at noon on Friday, March 19, from the National Residency Matching Program (NRMP) would reveal hospital residencies where each would spend their first three to seven years as physicians.

This year’s Match Day celebration was held virtually as a result of the COVID-19 pandemic. But distance couldn’t diminish the joy as students announced their residency matches and celebrated the results with their loved ones. More than 1,500 viewers watched the livestream as each student shared the name of the hospital and specialty that would serve as their first home as health professionals.

Elisabeth Young, M.D., (‘85), dean of the College of Medicine, congratulated the students on their individual achievements and the entire class for attaining an overall match residency placement rate of 99%. Fourth-year representatives Prabhsimran Batra and Trey Moberly each shared personal remarks and announced the Commencement Hooders, Gonfalonian (Samuel Doerle) and class speaker (Moberly).

Among the 138 graduating fourth-year medicine students, 52% will enter primary care residencies. This includes 35 students in internal medicine, 17 in family medicine, 12 in pediatrics, and three in obstetrics and gynecology. Surgery was among other popular choices, with 13% matching in surgery or surgery subspecialties ― eight students in general surgery, three in orthopedic surgery and three in urology.

Of the upcoming fourth-year medicine graduates, 56% will remain in state for their residencies, fulfilling NEOMED’s continued goal to create health professionals for and from Ohio.

As ever, NEOMED students were matched with some of the best hospitals in the nation, including Mayo Clinic (Rochester, Minnesota), Cleveland Clinic, Cedars-Sinai Medical Center (Los Angeles), Rutgers/Robert Wood Johnson Medical School (New Jersey) and UPMC (Pittsburgh) ― as well as other distinguished institutions in Ohio and across the country.  Several students also matched with military medical centers, including Walter Reed National Military Medical Center in Maryland and Tripler Army Medical Center in Hawaii.

Students begin applying for residency programs at the beginning of their fourth year. Throughout the fall and early winter, applicants interview with programs. From mid-January to late February, applicants and program directors rank each other in order of preference and submit the preference lists to National Residency Matching Program, which processes them using a computerized mathematical algorithm to match applicants with programs.