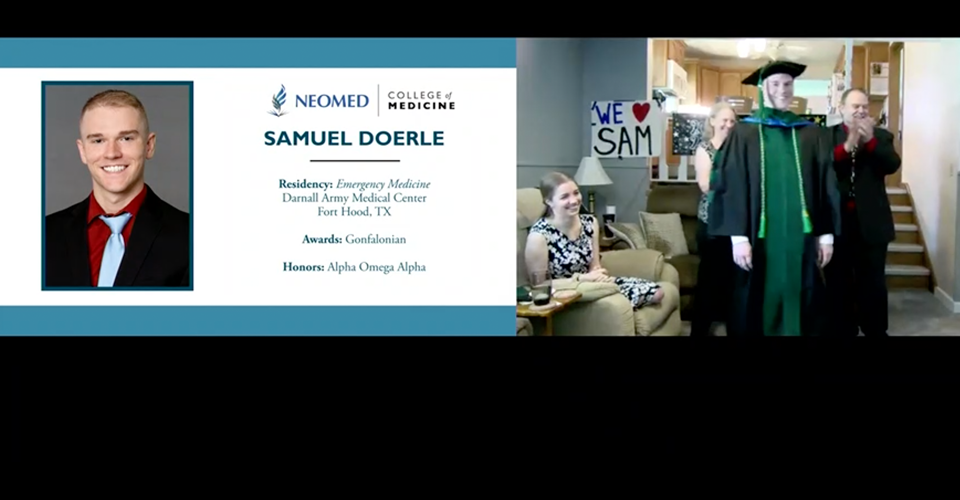 Hooray, new graduates; it’s official! Years of hard work by students in the College of Graduate Studies, College of Medicine and College of Pharmacy  was rewarded at NEOMED’s 41st Commencement Saturday, May 1.

President Langell congratulated the 229 new graduates, predicting that they will go on to become transformative leaders representing NEOMED’s values of empathic, ethical care.

Some Commencement traditions endured, while adjustments were made due to the continued high count of COVID-19 cases. President Langell began the virtual event with a moment of silence honoring the lives lost to COVID-19 and the passing of former NEOMED President Jay Gershen.

Honorary faculty hooders were still named, although this year, the ritual of draping the fabric over the gowned graduate’s mortarboard was performed by family or friends. And in front of a sign that said, “We Love Sam” (with a heart image swapped in for “love”), Samuel Doerle was announced as this year’s Gonfalonian – the person who graduated at the top of the College of Medicine Class of 2021.

Most important, the use of Zoom allowed the excited new graduates to appear individually on screen as their names were announced. In the company of family – including a new baby introduced to the audience – or friends, from apartments or homes decked out with balloons, the new graduates had a moment in the spotlight to thank everyone who had helped them along the way. Sentiments ranged from “Congratulations to my fellow Walking Whales!” to  “Mama, this is for you!” and the most popular and heartfelt, “We did it!”

Before the awarding of the degrees, Board of Trustees chair Rick McQueen complimented the new graduates for developing as compassionate, high-performing health professionals, and Dr. Langell announced the 2021 honorary degree recipients: Daisy L. Alford-Smith, Ph.D., and Ronald Richard, M.A.

In a keynote address, Cliff Megerian, M.D., CEO of University Hospitals, advised the new graduates to put the patient’s needs first; continue learning on the job, including leadership skills; be honest and transparent; and “distinguish yourself with compassion.”

“I’m so proud!” one onlooker burst out from the background of a student’s Zoom call. With those words, she spoke for all.

Read about the 2021 honorary degree recipients