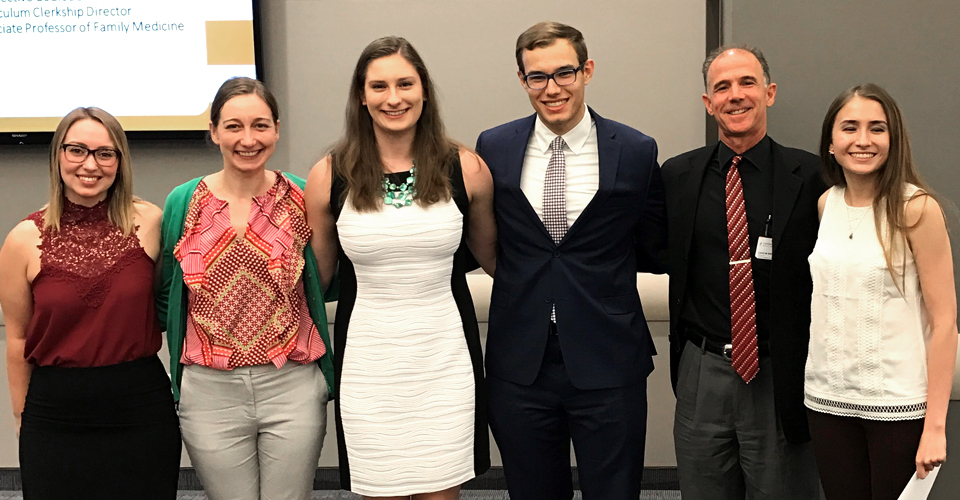 Seven rising M4s were inducted into the NEOMED Chapter of the Gold Humanism Honor Society (GHHS) on June 26, 2017. The Class of 2018 inductees include Sharon Bernard, Neha Chavali, Amythest Gauthier, Sarah Hill, Daniel Kreatsoulas, Darian Roberts, and Paula Rote. Dr. David Sperling, a current GHHS member, was the recipient of the 2017 Leonard Tow Humanism in Medicine Award and the keynote speaker at the GHHS induction ceremony.

The Gold Humanism Honor Society began in 2001 and was developed by the Arnold P. Gold Foundation to recognize students who demonstrate exemplary attitudes and behaviors characteristic of the most humanistic physicians. There are currently 96 Gold Humanism Honor Society chapters in medical schools throughout the United States and abroad. In 2004, NEOMED held its first GHHS induction ceremony, recognizing a total of four members of the class of 2005. With this year’s seven inductees, the NEOMED GHHS chapter now has a total of 73 student and alumni members, as well as 11 clinical faculty members.

The student inductees were nominated by their peers and the final selection process was conducted through the NEOMED GHHS Advisor Committee, which consists of:

*Not pictured in the photograph: Sharon Bernard, Neha Chavali