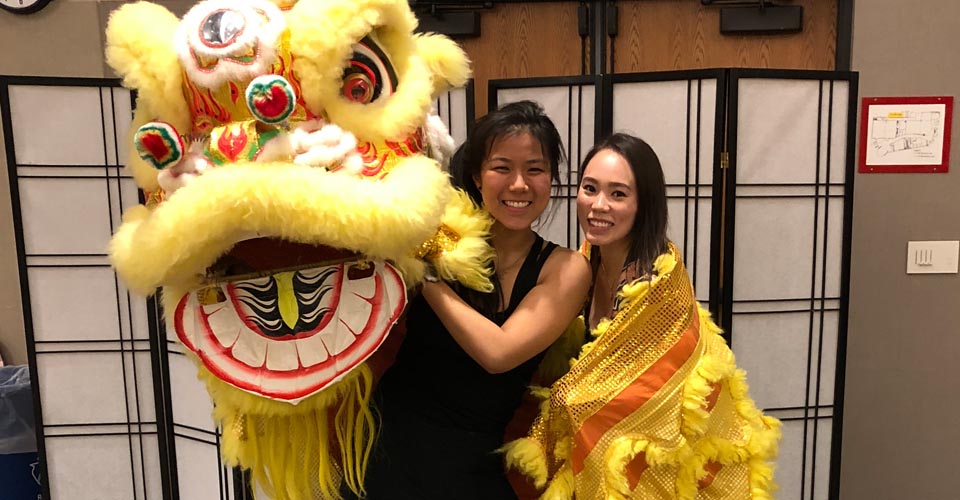 From the Lion's Mouth

How do you pacify a roaring lion? If it’s doing the traditional Chinese New Year dance, you feed it with red packets of lucky money before it puts your head in its mouth.

Wednesday night, students, staff and faculty turned out for a Lunar New Year Celebration at NEOMED that included College of Medicine students Katherine Wu, M1 (shown at left in photo above) and Cynthia Pung, M2 (shown at right in photo above)  costumed in a lion’s costume and circulating around the crowd to collect those red envelopes. Traditionally, Chinese children receive lucky money in the red packets each New Year.

Attendees had plenty to do, with a chopsticks relay race (with lucky money envelopes for the winners), a Vietnamese dice game, an Asian snack table, calligraphy done by Chinese pharmacy students visiting from Anhui University this year, a photo booth and a New Year’s Resolution wall. There were also a few performances, by the Anhui students, a Youngtown State University student and two first-year College of Medicine students.

Food for the event was catered by Pung’s family’s restaurant—the Golden Dragon in Cuyahoga Falls—complemented by bubble tea from Ming’s Bubble Tea in Kent, as well as oolong (black tea) and green tea.

“Lunar New Year has always been my favorite holiday, and I’m so proud of APAMSA for putting on such a great event,’’ said Pung. “I’m really glad that the NEOMED community could experience such a unique part of East Asian culture.”

Cynthia Pung, a second-year student in the College of Medicine, contributed to this report.