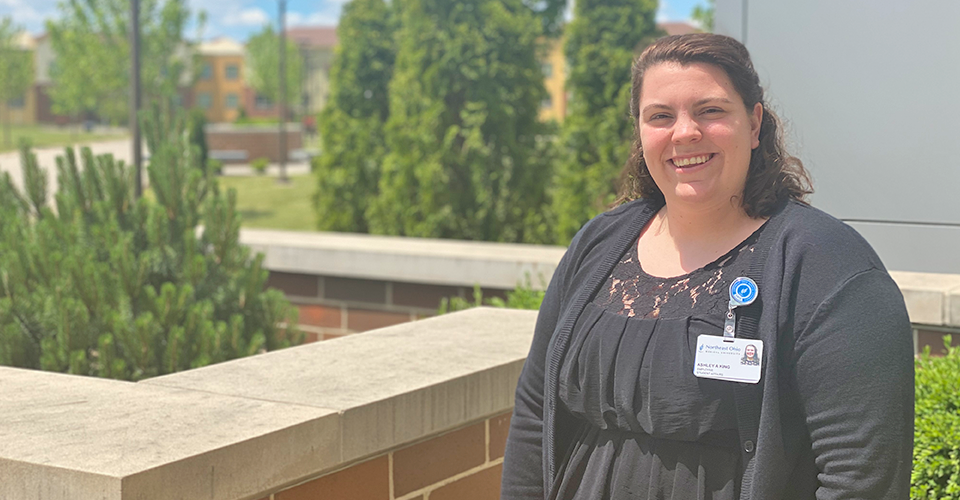 Get to Know Ashley King

Tell us about yourself, Ashley.

AK: I graduated from Baldwin Wallace with a dual degree in marketing and human resources in 2016. While I was at BW, I was super involved on campus. I was the student director of our dance marathon, I served as student body president, I was a member of a sorority and was just super overly involved, which I think led me to doing student activities.

After that, I took a year to try to figure out what I wanted to do. I spent a month in the Dominican Republic teaching English as a second language. It was fun and I had been so busy in undergrad that I needed some time to slow down.

What brought you to NEOMED?

AK: I grew up in this area, so joining NEOMED is kind of like coming back home. I often came to campus for a professional practices course in high school and I’ve been intrigued by the University ever since. This is an opportunity for me to move back closer to my family and work with a great population of students that I know I enjoy working with. I also had a number of friends in grad school who had done internships and things here, and everyone had such a positive experience. All of those things combined really made NEOMED a good choice.

Tell us about your new role as the coordinator of Student Services.

AK: As the coordinator, I’ll primarily support things like White Coat ceremonies, new student orientation, assisting student organizations and planning community service projects. In this role, I work closely with Brian Butler, the assistant director of Student Services, to make sure that our students are engaged outside of the classroom.

What excites you about NEOMED?

AK: Engaging with students is the best part of what we do in Student Services — and as a University. So during the pandemic it's been kind of weird to not have a lot of interaction with anyone, except via email. That’s what I'm looking forward to most — getting to know the students and staff better.

What did you do to keep busy when Ohio was under stay-at-home orders?

AK: I watched so much Netflix. I also have a group of friends who live pretty close by, so I would get together and have socially-distanced game weekends. Everything from board games, video games, all the outdoor games, you name it. That’s really what kept me going — looking forward to the weekend and having game nights.