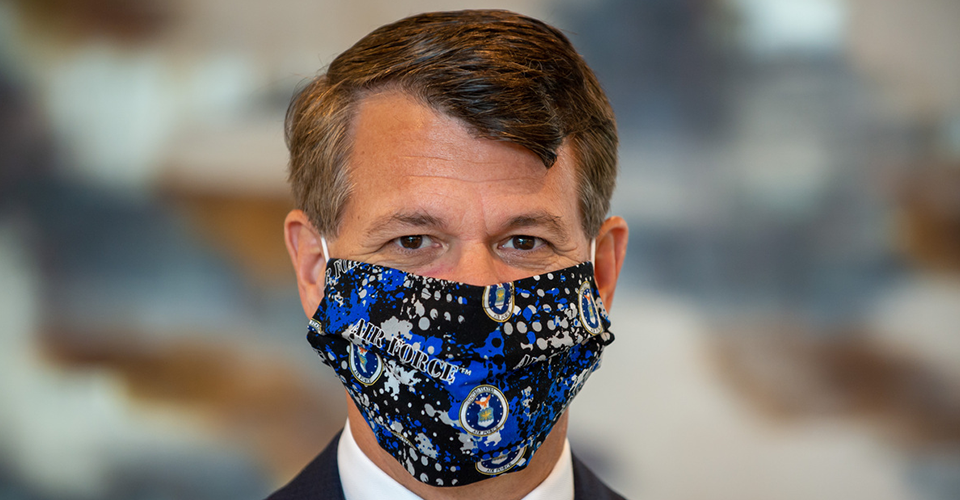 Listening and Leading: Reflecting on the First Year of John Langell’s Presidency

Today marks the one-year anniversary of when Dr. John Langell began leading the University, so the time seems right to reflect on how the University has moved forward under his steady, ambitious guidance. It’s also remarkable to read an interview with him, printed one year ago, and see how far he has already progressed on the goals he set out then – not knowing, of course, that a global pandemic would figure into the plan.

Dr. Langell began by listening – and not to just a few conversations. He set out on the Langell Listening Tour – meeting with groups of students, faculty members, staff, alumni and community leaders.

Early on, he received faculty retention and climate survey results. He responded with work on faculty compensation, development and shared governance. Dr. Langell also supported the Office of Human Resources in their work with an external consultant to revise the staff compensation plan to ensure that staff salaries align with market rates.

Learning that NEOMED’s health benefits budget had been exceeded by $1.5 million, Dr. Langell worked with HR to pivot from NEOMED’s status as a self-insured organization to an agreement that will offer the same level of coverage for health care and improved pharmacy coverage – at a reduced premium cost.

Five months into Dr. Langell’s tenure, COVID-19 was declared a global pandemic and in March 2020, NEOMED, like universities, businesses and institutions across the country, shut its doors. Dr. Langell appointed Joseph Zarconi, M.D. ('81), as medical director for COVID-19, and worked with his Executive Management Team to coordinate a response that took NEOMED into a new realm of mostly online learning.

Quickly ramping up a Lean Six Sigma program that had been planned for later rollout, Dr. Langell and his team provided training for those who might otherwise not had work that could be done from home, and provided guidelines for employees to work from home, meeting via Zoom. Building on that experience, the HR team and Dr. Langell have recently instituted flextime and telework policies.

When it became clear that fourth-year College of Medicine students would not be able to continue their clinical rotations, due to a lack of Personal Protective Equipment at hospitals and other institutions, Dr. Langell, faculty and staff worked tirelessly to develop alternate training. He also added the role of instructor to his duties, teaching “Intensive Care Medicine and ICU Resources in Pandemics” and joining with students on the Northeast Central Ohio (NECO) Surge Team to coordinate a contingency plan to meet a potential sudden increase in COVID-19 cases requiring hospitalization.

Regular COVID-19 briefings each Monday morning by President Langell became the norm last spring. Dr. Langell’s steady delivery carried the University through potentially unsettling news. As COVID-19 took its toll on Ohio businesses and it was announced that institutions of higher learning would receive less in State Share of Instruction support, Dr. Langell sought to reassure the campus community that layoffs were unlikely and that budget trimming would be done to ensure our sustainability.

The College of Pharmacy has enjoyed continued success this past year with a 94% graduation rate and 94% NAPLEX pass rate. According to ranking based on the first-attempt pass rates of the top performing pharmacy schools, NEOMED’s College of Pharmacy is 12th (out of 143) in the country instead of 66th as listed on the U.S. News & World Report rankings.

The College of Graduate Studies continues to grow under Dr. Langell’s leadership, and it recently received the Board of Trustees’ approval to develop two new master’s level programs, one in anesthesiology and another in health care system leadership. In another initiative to improve NEOMED’s percentage of Underrepresented Minority (URM) students, the Master of Anatomical Sciences program has been redeveloped as a pathway to enrollment in the College of Medicine, with 79% of the current MAS students categorized as URMs.

With Dr. Langell’s support, the University also fought against racism, conducting the Stand Up and Fight for a More Diverse Community forum, from which several initiatives have been put into action.

One key accomplishment set in place by the Langell Listening Tour was the development of a new Strategic Plan, conceived as providing direction for the next three to five years. The NEOMED Board of Trustees endorsed the plan in September, engaging more than 300 team members in the process.

To further the voice of alumni in implementing the Strategic Plan, Dr. Langell established an advisory council on which many alumni are represented.

To continue developing NEOMED’s strong community connections and to elevate NEOMED’s profile in health care thought leadership, Dr. Langell has instituted the VITALS program, a monthly speaker series that promises to enliven the discourse, scholarship and actions surrounding health care transformation. He has also launched the NEOvations Bench to Bedside program, a seven-month program that brings interdisciplinary teams of students together with medical professionals, industry experts, investors and others, to meet the needs of patients through medical technology design.

More than once, Dr. Langell has referred to NEOMED’s people as its most valuable resource. At the September 28 COVID-19 update, he announced that the University’s longstanding policy of offering an extended winter break will continue, accomplishing two goals: offering much-deserved time off and achieving cost savings (and this year, mitigating health risk) by closing the building for two weeks.

The University is well positioned to succeed.  It has been a phenomenal year, albeit with its challenges, and NEOMED is well positioned for the remarkable things that will continue to happen to expand the University’s impact, enhance the exceptional student experience, create new knowledge, foster discovery and enrich all of our lives – all under Dr. Langell’s leadership.