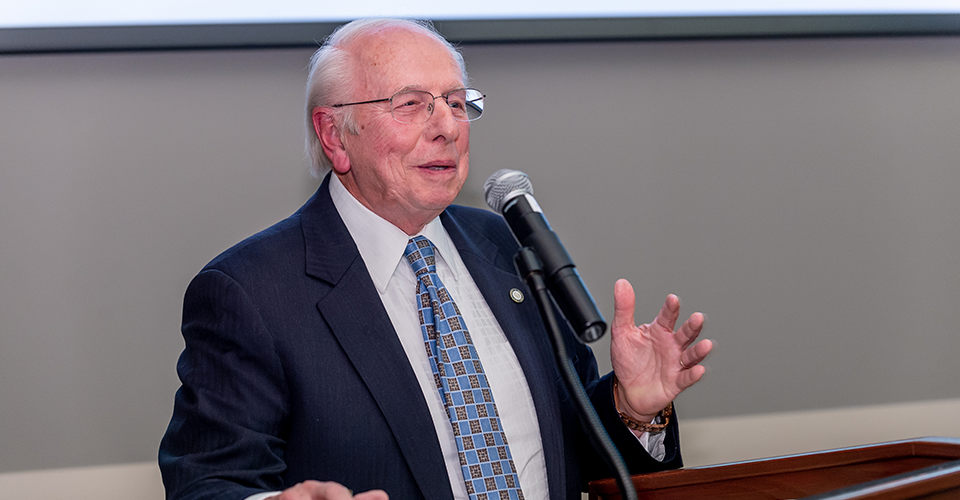 NEOMED will present Rich Lewis, M.S., M.A., with an honorary Doctor of Science degree during the 2019 Commencement ceremony. A proclamation from the Board of Trustees noted its “great appreciation, admiration and respect” for Lewis and detailed his “outstanding contributions to NEOMED, the Northeast Ohio region, the State of Ohio and the nation related to higher education, state and local government relations, capital budgets, medical and health care education, research and services legislation and community service for more than 45 years.”

Lewis began his NEOMED career in July 1983, when he was appointed vice president for administration and public affairs. Lewis left NEOMED in 1999 to serve as the President of the Lincoln (Nebraska) Medical Education Foundation, returning in 2003 as vice president for external affairs and resuming his role as secretary to the Board of Trustees. Prior to joining NEOMED in 1983, he was the founding director of the Statewide Ohio Area Health Education Centers program for the Ohio Board of Regents. He retired from NEOMED December 31, 2018.

President Gershen remarked on Lewis’ impact on the University, saying, “NEOMED would not be where it is today without Richard’s extraordinary work and contributions. Working with Rich has been an honor and a privilege.”