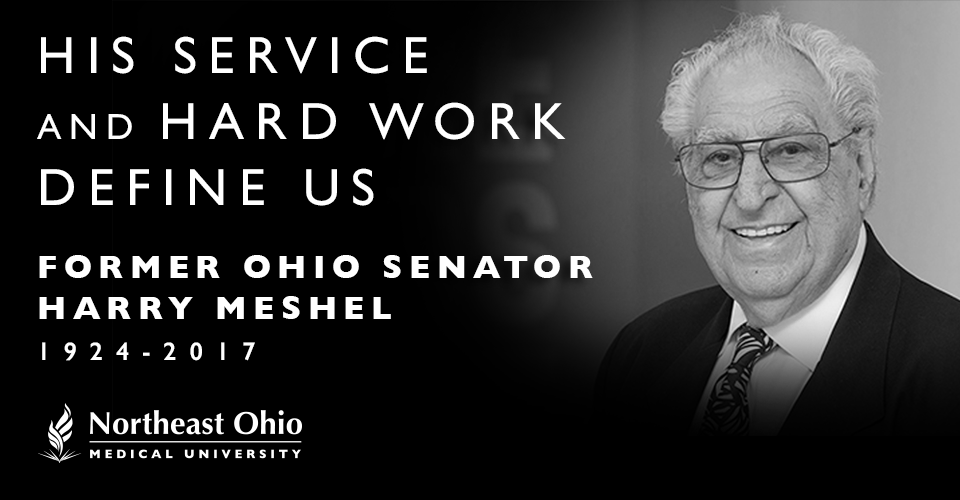 On a day in which we honored working people, we reflected on the essence of hard work with the passing of former state senator Harry Meshel, who died Monday, Sept. 4, at the age of 93.

As a representative of the people of Northeast Ohio, Sen. Meshel served in the Ohio Senate from 1971 through 1993. Meshel was one of three original sponsors of Senate Bill 72 which was approved by the Ohio General Assembly in 1973 and created what is now known as Northeast Ohio Medical University.

Meshel was not only a driving force behind the establishment of NEOMED but he also played a key role in helping obtain capital appropriations and operational funding for the University during the 1980s.

During his tenure in the Senate, Meshel worked tirelessly to support health education and wellness, helping to create the Ohio University College of Osteopathic Medicine; Wright State University School of Professional Psychology; and the Ohio Athletic Commission.

As the 85th Ohio Senate President from 1974 to 1980, and Majority Leader, he was widely respected and recognized for his knowledge of public education and his experience as teacher, principal, school superintendent and professor at both The University of Akron and Kent State University.

Meshel served during World War II from 1943 to 1946. He was awarded two Bronze Battle Stars for the battle of Leyte Gulf in 1944. He earned his bachelor's degree in business from Youngstown College in 1949 and a master's degree in urban land economics from Columbia University in 1950. That same year he became a limited instructor at Youngstown College, while also working in investment, real estate and insurance.

“My tradition in life is, when people start objecting, you fight harder. You teach them to respect you and understand you. That’s what you have to do with legislation. We began working, we drew allies in, got the speaker of the house interested, and got people in the Senate interested.”

In recognition of Meshel’s vision for interprofessional health education and service to the people of Northeast Ohio, NEOMED named the Harry Meshel Hall for Integrated Health Professions Education in his honor.

“As a result of Harry Meshel’s vision more than 40 years ago, no matter where you go in Northeast Ohio for your medical care today, the chances are quite high that you will be cared for by someone affiliated with Northeast Ohio Medical University – one of our medicine college or pharmacy college graduates, clinical faculty members or medicine or pharmacy students,” noted Rich Lewis, vice president for external affairs and secretary to the board of trustees. “Sen. Meshel was a long-standing friend who will be greatly missed. His contributions to the development, growth and success of NEOMED were significant.”