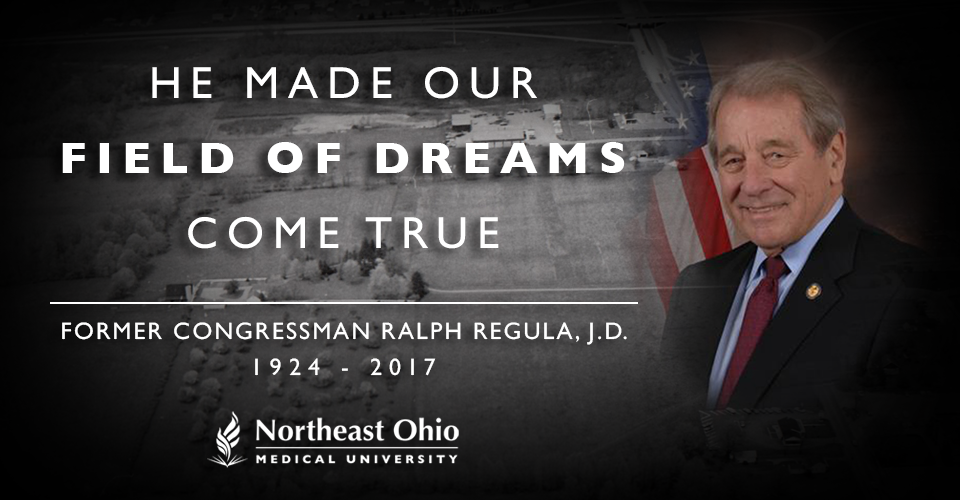 When we received the news that Ralph Regula, J.D., 92, died at his residence Wednesday evening, July 19, 2017, we were saddened by this loss of one our founders. As we mourn for him with so many others, we want all to know that the NEOMED community is fortunate to have been a beneficiary of his largesse as a public servant.

Regula served as a U.S. Congressman; state representative, senator and school board member—all in Ohio—and as a lawyer, a teacher, a principal, an historian and a farmer.

In 1973, NEOMED was established as a community-based medical university. Since then, the University has educated thousands of health care professionals, many of whom have returned to practice in Northeast Ohio. Regula made our field of dreams come true.

“I first met Congressman Ralph Regula in the mid-1970’s and over the years have had the privilege of working with him on a number of projects,” recalls Rich Lewis, vice president for external affairs at NEOMED. “He was truly one of the most honorable, ethical and respected elected officials with whom I have worked. He worked effectively with Republicans, Democrats and Independents in the best interests of the citizens of the United States. I am proud to have known him and to have been his friend.”