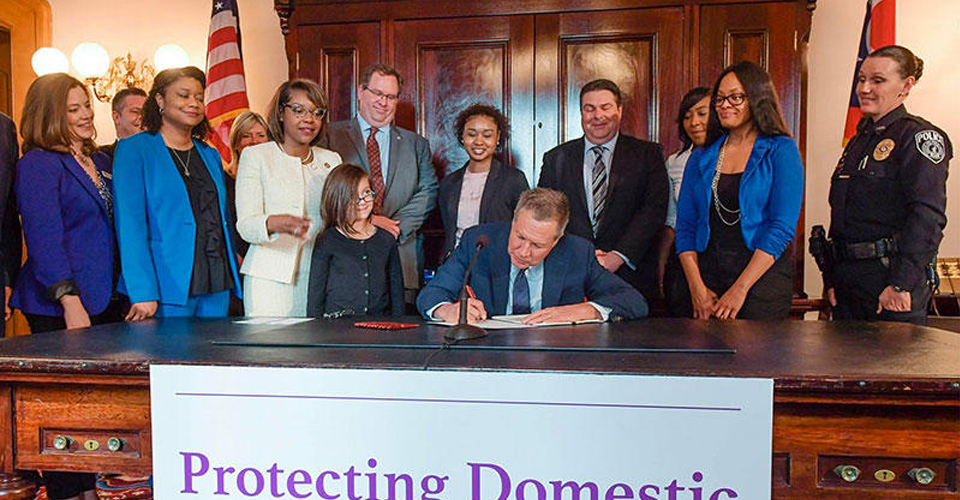 NEOMED Police Officer Kelly DiBona met Representative Emilia Sykes at a panel interview on domestic violence at NEOMED in October 2015. Representative Sykes stated that she was working on a house bill to introduce to the General Assembly that would update the outdated terminology in Ohio’s Revised Code as it related to dating violence. Ohio and Georgia were the last two states that still had outdated terminology, creating loopholes in which victims of dating violence could not access various resources, including civil protection orders. Since the meeting, Representative Sykes has worked through two General Assemblies and had two co-sponsors to assist in getting an improved bill passed. Several advocates from Ohio attended committee meetings at the Ohio Statehouse to give proponent testimonies on the necessity and urgency of these changes. Officer DiBona, on her own time, testified in front of the Senate committee to advocate for this change. She saw the need, as civil protection orders are a tool that gives victims of dating violence another valuable resource in the transition from an unhealthy relationship to a more positive one. Previously, protection orders were only available to family household members such as spouses, cohabitants and those that had children together. This left victims who were dating but chose not to live together without this protective resource. As a result of the Senate committee meetings, Governor Kasich signed a new Ohio law expanding civil protection orders to dating partners on April 5, 2018. The bill will take effect in early July.

We are very proud to have Officer DiBona serving our campus. She truly cares about those she protects and is always looking to increase protections for those who are at risk.