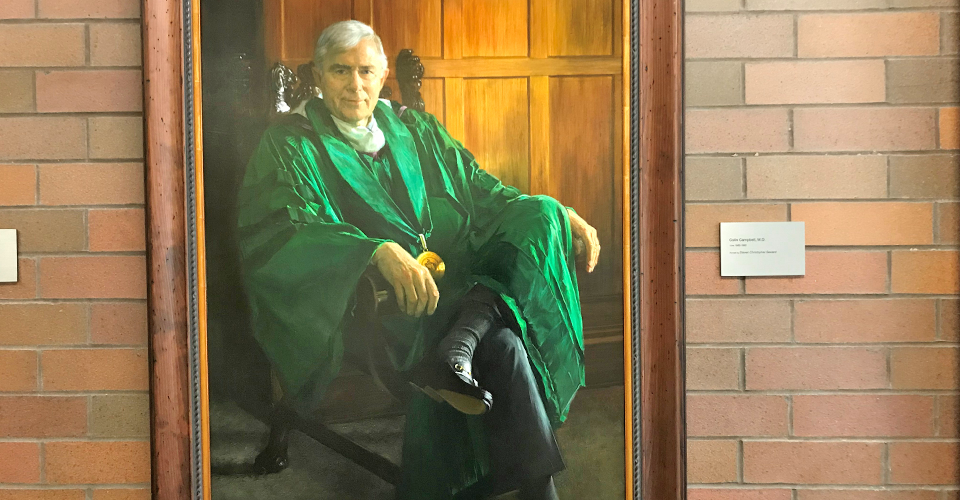 Colin Campbell, M.D., was the first person hired to lead NEOMED via a national search. He was also the first president who had not been involved with the University since its inception. However, Dr. Campbell was in for an unpleasant surprise shortly after accepting the role.

Dr. Campbell left his position as dean of the School of Primary Medical Care and director of medical affairs at the University of Alabama in Huntsville to become provost and dean at NEOMED (then NEOUCOM) on February 1, 1983. According to Silver Reflections: A History of the Northeastern Ohio Universities College of Medicine 1973-1998 by Margaret J. Neumann Dietz, Dr. Campbell announced as his first priority the management of the limited resources of the College to provide quality education for the students.

Before Dr. Campbell could get too far, he received unexpected, and potentially catastrophic news. The Ohio Board of Regents released a preliminary report projecting a surplus of physicians in Ohio and calling for one or more schools of medicine to be closed. Dr. Campbell rallied the deans of the other six medicine schools to convince the state that these institutions were vital to the state’s health. During the next four months, Dr. Campbell made more than 30 trips to Columbus to work alongside the other deans, legislators, lobbyists and members of then-Gov. Richard Celeste’s staff.

Dr. Campbell helped make the case to the state government that the schools served multiple purposes and that decentralizing medical education would improve health care throughout Ohio. The Amended Substitute House Bill 291 was passed on July 1, 1983, with a line item proposed by Dr. Campbell that would award NEOMED (and other Ohio medical schools without a hospital) $9,500 per student. This resulted in over $3.6 million in funding, which was essential to the University’s growth. Dr. Campbell later said it was the most important act of his tenure at NEOMED.

From there, Dr. Campbell focused on expanding the campus. The lower level of the E wing was completed, along with the 180-seat Liebelt Hall. The second floor of the administration building was enlarged to create office space for AHEC, Community Health Services, Academic Affairs, Continuing Medical Education and Public Affairs. A 400-seat lecture hall was added and named in honor of State Senator Harry Meshel. Construction also included the physical plant and warehouse facility, as well as the expansion of Olson Hall, Café Clark and the Gross Anatomy Lab to keep up with the new demands of the growing student body. Construction of the Collaborative Medical Research Building and the Northeastern Cooperative Regional Library Depository also began during Dr. Campbell’s tenure.

Some of the most time-honored traditions at NEOMED were initiated by Dr. Campbell. The Body Donor Memorial Service (still held today) was first held in 1985, with the loved ones of the body donors invited to campus for an event honor the donors’ contributions. In 1986, following a suggestion from Dr. Campbell’s wife, Catherine, the Oath of Hippocrates was first read at Commencement. The Oath is still read by students and alumni at Commencement and other marquee University events each year.

Near the end of 1990, Dr. Campbell announced his intention to retire in June of 1992 giving the University plenty of time to find its next leader. A true lifelong learner, Dr. Campbell began working on a master’s degree in history from the University of Akron after leaving NEOMED.

Although he was an avid history buff, his first love remained the field of medicine – the same passion that had driven him to advance NEOMED during his decade of service to the University.

“I don’t think there could be any better profession than medicine,” noted Dr. Campbell. “The focus is still the same, people are still being born and going through life’s cycles, and we still need to take care of the sick and the injured. As a physician, you get to do something worthwhile every day. That’s what’s good about medicine.”

Dr. Campbell passed away peacefully in his Memphis home at age 92.