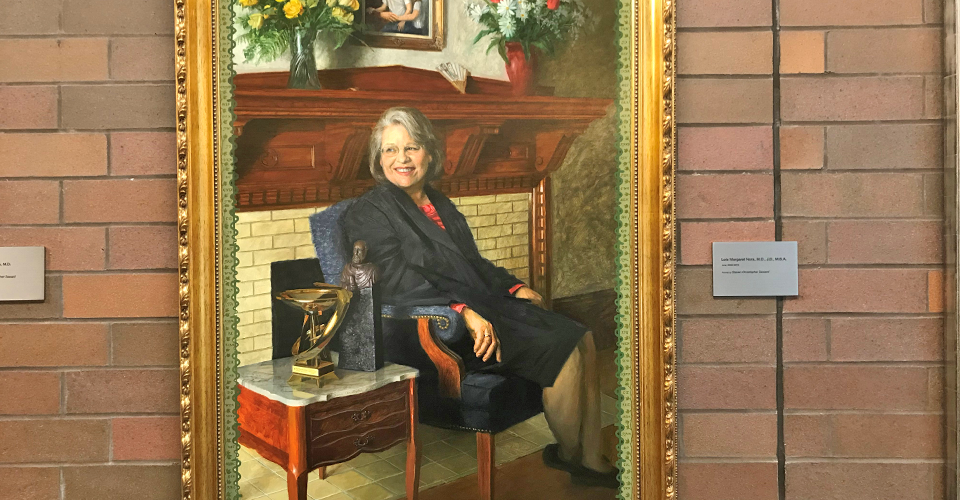 When Lois Nora, M.D., J.D., M.B.A., became the president and dean of College of Medicine at NEOMED in 2002, she was just one of nine female deans of the 120 medicine schools in the U.S. Her work as a leader in medicine and women in medicine has made an impact on NEOMED and nationally.

Medical education was part of Lois Nora’s roots. The daughter of a physician, Dr. Nora was among four of eight children in her family to earn a medical degree – hers, from Rush Medical College in Chicago in 1979. After completing a residency in neurology and a fellowship in electromyography and neuromuscular disease, she decided that she wanted to continue advancing her education, despite the demands of managing a private medical practice. Dr. Nora earned a J.D. from the University of Chicago and an M.B.A. from the University of Kentucky (UK) in Lexington.

Dr. Nora initially arrived in Lexington, Kentucky in 1995 as the associate dean of academic affairs for the UK College of Medicine, also teaching neurology and law. A visit to Rootstown as a visiting professor in 1996 was her first stop at NEOMED (then NEOUCOM). In 2002, Dr. Nora was appointed as president and dean of NEOMED, succeeding Dr. Robert Blacklow following a national search.

Dr. Nora was known for her leadership abilities, most especially for fostering high-performing teams, building consensus and seeking diverse stakeholder engagement. She was also known for her generosity. In response to the 2008 economic recession, Dr. Nora donated a month’s salary to help students in need.

“All of us at NEOUCOM are committed to leading by example and, for me, this is the right thing to do at a time when the people of Ohio are faced with such adverse economic pressure,” Dr. Nora said then. “Scholarship assistance and academic program enhancements are important ways to ensure that outstanding medical and pharmacy education continues to be available, especially to socioeconomically disadvantaged students who are most negatively impacted by high tuition.”

In July 2008, Dr. Nora announced that she would depart from her role as president and dean when her contract ended in 18 months, simply stating, “this is the best move at the best time.” She would remain in her role as president emeritus and dean of medicine emeritus, as well as a professor of internal medicine, where she taught as recently as March 2020.

Her commitment to serving the community as strong as ever, Dr. Nora has served in many national capacities, including as president and CEO of the American Board of Medical Specialties, as well as president of the American Association of Neuromuscular and Electrodiagnostic Medicine; on the board of directors of the Association of American Medical Colleges; and trustee of the Margaret Clark Morgan Foundation (now Peg’s Foundation).

According to Washington State University, where she is a volunteer advisor in the Elson S. Floyd College of Medicine, Dr. Nora served in 2018 as a Fellow in the Advanced Leadership Initiative at Harvard University, where her work focused on “accreditation as a lever for positive change in education” and she continued work on the history of women in medicine.