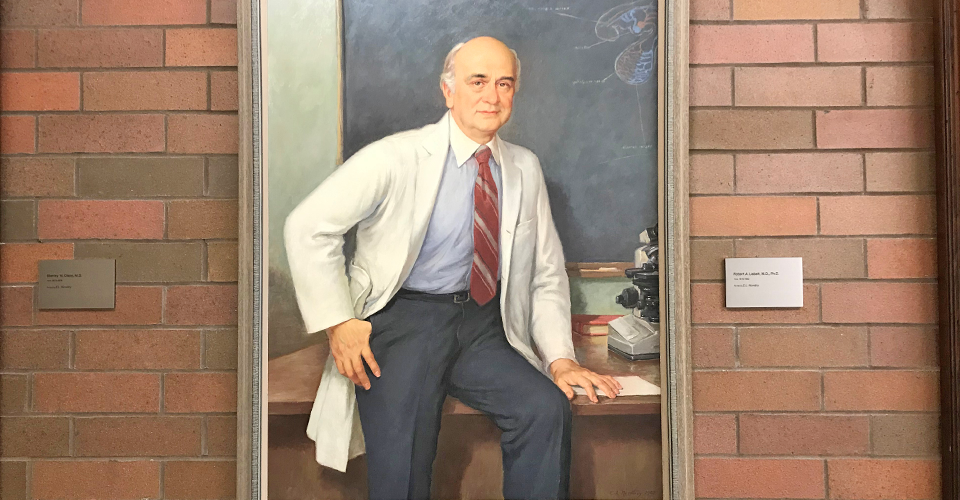 When Stanley W. Olson, M.D., retired as NEOMED (then, NEOUCOM) provost in 1979, the choice of a person to assume his role was clear. Robert A. Liebelt, M.D., Ph.D., was quickly promoted and ushered in as the new provost – and kept his old role as well.

Dr. Liebelt had been serving as the founding dean for the College of Medicine when Dr. Olson announced his plans to retire. Upon a recommendation from Dr. Olson, the board of trustees voted to combine the Office of the Provost with the Office of the Dean – with Dr. Liebelt being the first to hold the dual role at the helm.

Dr. Liebelt had a reputation as an outstanding speaker and communicator. These skills helped him to bring together local universities, hospitals and business leaders to buy into the new medical school and its vision.

According to Silver Reflections: A History of the Northeastern Ohio Universities College of Medicine 1973-1998 by Margaret J. Neuman Dietz, Dr. Liebelt referred to himself as NEOMED’s “construction manager” in the early years, as he recruited and hired faculty, developed the curriculum, and worked to increase admissions as well as consortium hospital affiliations.

A highlight of Dr. Liebelt’s tenure was overseeing the University’s first commencement and conferring degrees to the charter class of 1981. Along with the help of a few others, Dr. Liebelt officiated over the presentation of Doctor of Medicine degrees to the 42 graduates at the ceremony in E.J. Thomas Hall in Akron.

Just over a year later, in September 1982, Dr. Liebelt retired from NEOMED. He left with several gifts of appreciation, including a rocking chair, a plaque from the Council of Surgery for meritorious service, and an Ohio General Assembly resolution presented by the late Sen. Harry Meshel. After his retirement from NEOMED, Dr. Liebelt served for nearly two decades as chief of addiction medicine for the Summit County Alcohol, Drug Addiction and Mental Health Services (ADM) Board.

Dr. Liebelt would return to NEOMED’s commencement in 2018 – this time to receive an honorary degree for all of his many contributions during the early years of the University.  Dr. Liebelt accepted the honor on Armed Forces Day, which served as dual recognition for this veteran of the U.S. Navy, who had served as a turret gunner during World War II.

Dr. Arredondo added, “His commitment to NEOMED over his lifetime has impacted the lives of nearly all of our alumni and he continues to be actively engaged in the institution.”