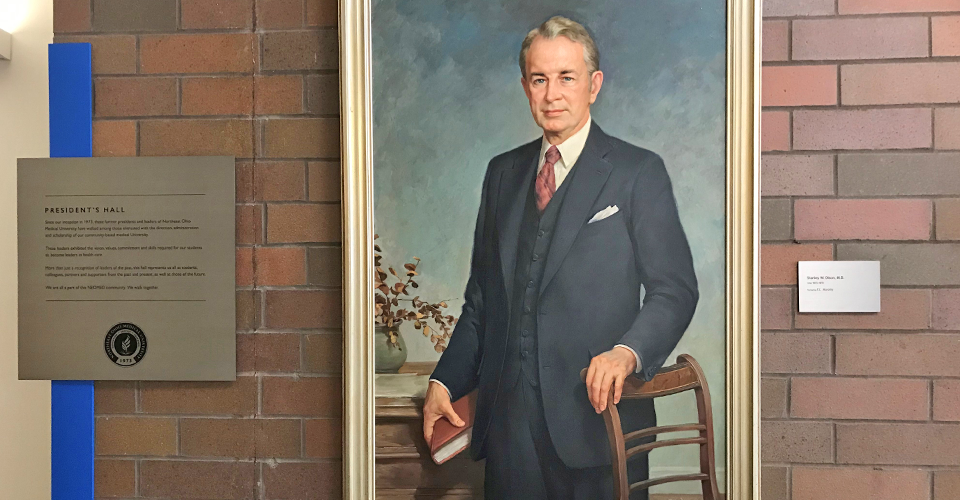 Stanley W. Olson, M.D., led the way for NEOMED from the very start.

It all started with a plan. The Northeastern Medical Education Development Center of Ohio, Inc. (MEDCO) approached Dr. Olson in 1972, seeking a plan to expand medical education in Northeast Ohio that would produce primary care physicians to fill the health care void in the region.

Dr. Olson’s report, “The MEDCO Plan for Medical Education – 1973” led the way for NEOMED (then NEOUCOM) to come into existence, initially as a consortium among Kent State University, The University of Akron and Youngstown State University.

However, Dr. Olson remained humble about the plan, acknowledging its shortcoming – albeit in a strategic manner.

“That first draft was no jewel, let me tell you,” said Dr. Olson in the book Silver Reflections: A History of Northeastern Ohio Universities College of Medicine 1973-1998, written by Margaret J. Neumann Dietz. “It was almost deliberately designed to be vague and have a lot of stuff in it that I knew we were going to throw out. If there had been too much detail, people would have quibbled; with generalities people saw the need for adding something and we got information that we didn’t have before.”

Shortly after, the NEOUCOM Board of Trustees extended an invitation to Dr. Olson to serve as the University’s chief executive officer and charter provost. Dr. Olson happily accepted.

Dr. Olson was responsible for many “first” milestones that helped NEOMED become the University it is today. He helped select Rootstown as a central location, oversaw the creation of a new medical education campus, welcomed the charter class in 1977 and created the NEOMED Foundation in 1978.

“It was the genius of Stan that he could weave these people into a single group focusing on a common goal rather than focusing on their animosities,” said Charles V. Blair, chairman of the MEDCO liaison committee. “As a result, people kept working with him, recognizing that he had unusual abilities in medical education and a tremendous focus on the job at hand.”

Dr. Olson would lead the fledgling University for the next five-plus years, retiring on his 65th birthday in February 1979. Not content in retirement, Dr. Olson would continue to contribute as president emeritus before serving as the first dean for the Morehouse School of Medicine in Atlanta, Ga.

“Eighty years of service and helping others fulfill their dreams is simply remarkable,” then-president Jay Gershen, D.D.S., Ph.D., noted upon his passing. “And when one thinks of the thousands of lives impacted by those he served, taught and mentored, his contributions to the health sciences create a legacy for which we all are fortunate to have been associated.