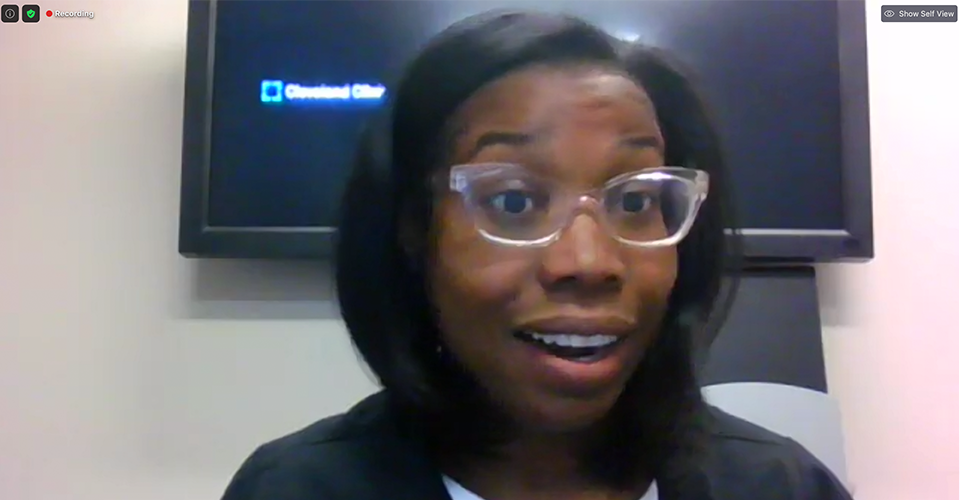 More than 50 members of the NEOMED community tuned in to the discussion, moderated by fourth-year pharmacy student Raymond Larnyoh.

Facing challenges in the field of pharmacy

When asked to describe what challenges the panelists face as persons of color in pharmacy, each pharmacist shared their stories and experiences.

Dr. Muteithia, a clinical pharmacist and Kenyan native, noted that she primarily practices telehealth and patients will often notice her accent and ask where she’s from, only to disregard her advice —despite her role as their pharmacist.

Dr. Smith, director of the American Society of Health-System Pharmacists’ section of Ambulatory Care Practitioners, acknowledged that she doesn’t fit the “stereotypical” pharmacist mold. “There’s not a lot of Black women that operate as health care providers. People picture pharmacists as an old white guy with white hair.”

Dr. Robinson, a pharmaceutical care manager at Cleveland Clinic - Family Health and Surgery Center Beachwood, took a moment to address the privilege she experienced when she attended a predominantly white, female high school, but went on to detail an encounter at a pharmacy the night President Obama was first elected in 2008.

“I was working by myself that evening and as the results started to roll in, I had people walk up to me and say, ‘If he gets elected, I’m leaving this country,’ based on the way I looked,” said Dr. Robinson.

Dr. Robinson also shared that patients have reported her to her manager for “impersonating a pharmacist” — even though she was wearing her own white coat with her name embroidered on it and there’s a picture of her hanging on the wall close by.

Larnyoh challenged the three panelists with offering their best career advice for students of color to prepare for the future.

Dr. Muteithia: Be prepared and aware. Work harder, be more polite. Don’t get jaded. It will be a tough battle ahead.

Dr. Smith: Have thick skin. I know this sounds pessimistic, but the reality is, it will get harder the higher you get. You’re not supposed to be there – you’re supposed to have long nails, typing, being someone’s secretary. You have to have thick skin as a pharmacist in general, now add pigmentation on top of that.

Dr. Robinson: The higher you go – the more you are a magical unicorn. Take the gawking as a compliment. Prove why hiring the black girl was a good idea. Is it fair? No. It’s a part of the game that has to be played.

While many challenges still lie ahead, the three pharmacists are optimistic about the efforts taking place — including the College of Pharmacy’s Diversity, Equity & Inclusion Panel — to make the field of pharmacy more diverse.

Dr. Robinson said, “Pharmacy’s outlook is as bright as we make it. There is lot of potential for growth and development. The increase in numbers over the year is encouraging and shows that representation matters. Those of us in the field need to reach back, communicate and show that we exist.”