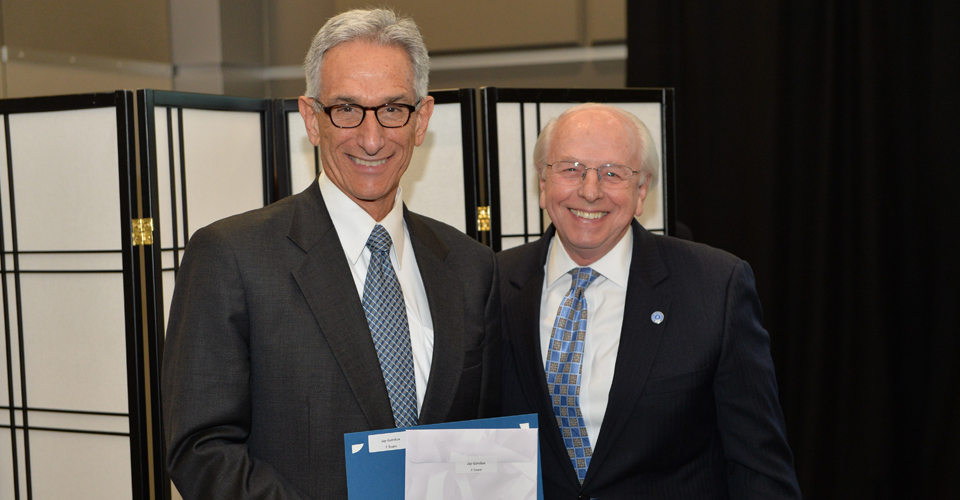 It’s hard to imagine NEOMED without Rich Lewis, a friendly public face of the institution, who has for decades advocated tirelessly on the University’s behalf.

Please read more in the following message from President Gershen.

It is with mixed emotions that I announce that Richard Lewis is embarking on a new chapter.  After 31 years of service to the Northeast Ohio Medical University community, the region, and state of Ohio, Rich has decided to retire as Vice President for External Affairs and Secretary of the Board of Trustees, effective December 31, 2018.

Rich’s long-standing and expansive career in higher education began in 1974 when he served as executive director and chief executive officer of the Health Education Alliance Through the University of Cincinnati (HEALTH-UC).  He also served as an assistant dean within the College of Medicine at the University of Cincinnati relating to the planning, development and operation of the prime contract for the Statewide Ohio AHEC Program.

Rich held multiple roles at the Ohio Board of Regents.  First and foremost, he served as founding director of the Statewide Ohio AHEC Program.  This critical position directed all aspects of the Statewide Ohio AHEC Program that included seven medical schools, ten area health education centers and more than twenty nursing, pharmacy and allied health colleges.  Rich created and implemented policy that was approved by the Ohio AHEC Advisory Board (OAAB), Dean’s Council of Medical Education and the Ohio Board of Regents.  Rich also served as the Ohio Board of Regents’ acting vice chancellor for health affairs during which he identified and directed the distribution of funding for health professions training programs ― medical, dental, nursing, pharmacy, allied health and geriatric medicine.

Rich was appointed vice president for administration and public affairs, as well as secretary of the Board of Trustees at NEOMED, in July 1983.  He served in this capacity for 12 years and managed public and government relations, physical plant operations, communications, development, alumni relations, human resources and institutional safety and security. He directed all aspects of government relations focusing on the state level in such areas as legislation, operational budgets, capital budgets and medical/health care education, research and services.  In addition, he arranged for all funding for capital construction totaling over $40 million and negotiated legislative support of all state funding for ongoing operations of the physical plant including buildings and grounds.  In 1995, Rich was appointed vice president for public affairs and facilities planning and secretary, Board of Trustees at NEOMED.

In August 1999, Rich was appointed president and chief executive officer of the Lincoln Medical Education Foundation, a $9 million health education and community services organization that trained individuals to treat the whole patient ― in the context of the family ― in Lincoln, Nebraska.  While serving in this position, he was responsible for administering a family medicine residency program, a large ambulatory care clinic, an oncology research and education program and a housing and education program for low income families.

Rich returned to NEOMED in 2003 as the vice president for external affairs and secretary to the Board of Trustees. Throughout his 15 years in this role, Rich has directed all activities related to government relations, focusing on operational and capital budgets in addition to medical and health care, research and services legislation.

Rich played a key role in several major initiatives related to the (former) Northeastern Ohio Universities College of Medicine (NEOUCOM) becoming one of Ohio’s 14 public universities.  This included assisting in the development and obtaining state approval of the College of Pharmacy; assuring NEOUCOM was an active participant in the Northeastern Ohio Universities Collaboration and Innovation Studies Commission; helping to obtain the Chancellor’s support for changing NEOUCOM’s Board structure by having the Governor of the State of Ohio appoint the 11 members of its Board of Trustees; adding Cleveland State University to the NEOUCOM BS/MD partnership ensuring four university partners for this program; and developing and securing approval from the Ohio General Assembly to change the institution’s name to Northeast Ohio Medical University in 2011.

On the state level, Rich played a key role in securing funding for an additional 140 medical students in partnership with Cleveland State University as well as in establishing the NEOMED Academic Campus at Cleveland State University.  This legislation also eliminated the outdated buffering system which limited the State Share of Instruction (SSI) revenue for which NEOMED was eligible and eliminated caps on NEOMED’s medical college enrollment.

As secretary to the Board of Trustees throughout his tenure at the University, Rich has been responsible for conducting highly effective, efficient and well-run trustees meetings in support of the president and the University.  He conducted an in-depth review process to ensure all records, minutes, correspondence and other documents are maintained according to the University’s Board of Trustees Bylaws.

Finally, he designed and constructed the University’s mace and led the successful effort to establish the Northeast Ohio Medical University as a tobacco-free campus approved by the Board which became effective June 20, 2016.

We will sincerely miss his friendship, talent, dedication and leadership.  NEOMED would not be where it is today without Richard’s extraordinary work and contributions.  We wish him, his wife, Joyce, and their children, all the best in this next chapter of his life. Working with Rich has been an honor and a privilege and a reception in his honor will occur later this year.  We hope you will be able to attend and have the opportunity to personally thank him for all that he has done for our University.