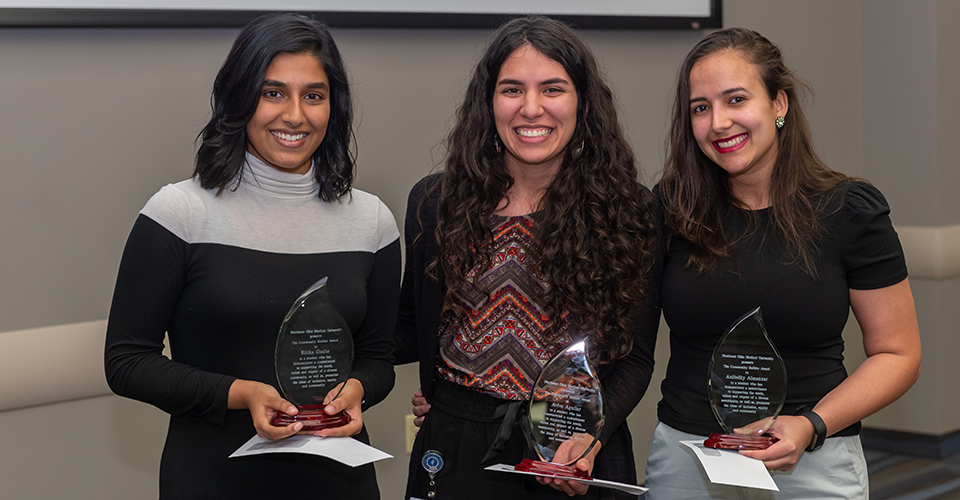 Awards were announced at a ceremony in the NEW Center Thursday, Nov. 21, honoring all of the student nominees.

Each year, the Community Builder Award recognizes “a medicine, pharmacy or graduate student who has demonstrated a commitment to being open and sensitive to the unique needs and interests to diverse populations.”

In his remarks to the audience, Vice President for Human Resources and Diversity Andre Burton, J.D., noted that this year, the judges decided to present cash awards and plaques to not one but three Community Builder Award winners, because the nominees were so outstanding.

Burton also announced that all of the 2019 Community Builder nominees, as well as the Pharmacy Diversity and Inclusion Excellence Award nominees, would receive an award, due to the exceptionally high standard of the nominees in both categories.

Burton noted that as the number of student organizations at NEOMED has grown to 90, that number now includes 15 with a focus on diversity of various types. He thanked the Black Student Association, the Student National Medical Association and the Latino Medical Student Association for their efforts to increase diversity at NEOMED by meeting with prospective students and helping them to feel welcome at NEOMED during their interview process.

About the winners: Community Builder Award

Aviva Aguilar and Anibelky Almanzar are second-year College of Medicine students who serve as co-presidents of the Latino Medical Student Association. One of Almanzar’s nominators said, “Anibelky is an amazing role model, advocate for diversity and the under-supported and under-resourced and has the potential to change the way health care supports the most vulnerable populations. She is building a community of care and advocacy right here at NEOMED.”

A student member of the Diversity Council, Almanzar was part of a group from NEOMED’s LMSA that visited Washington, D.C. to advocate for Latino health care before members of Congress.

Aguilar also represented the LMSA in Washington, D.C., and with the Student National Medical Association, she helped to start a mentorship program for underrepresented students at the University of Akron. She volunteers at events such as the St. Bernard’s Health Fair, assisting families when they need translation help

Over the winter break, both Aguilar and Almanzar will visit the U.S. Mexico border to do volunteer work including translating at camps along the border. They will travel with a group that includes Julie Aultman, Ph.D., chair of NEOMED’s Diversity Council.

Ritika Gudhe is dual-enrolled as both a second-year College of Medicine and College of Graduate Studies student. President of the American Sign Language Group of Kent State University and NEOMED, Gudhe works to encourage the use of American Sign Language (ASL) among medical professionals. She recently collaborated with course directors to modify a segment in NEOMED’s Human Values in Medicine program focusing on disability, deaf culture and social justice so that it included a workshop teaching all students some fundamentals of ASL.

Gudhe did a summer research project working with delirium patients and the aging population at the University of North Carolina at Chapel Hill. She has volunteered at the Open M free clinic, administering flu shots and managing a full-service pharmacy that provides free medicine to this underserved population. About the Winners: Pharmacy Diversity and Inclusion Excellence Award

Second-year College of Pharmacy student Ikenna Ogwuegbu was one of the organizers of the Black Student Association at NEOMED. His nominator noted, “This group has been a great source of support for first-year students.”

A student member of the University’s Diversity Council, Ogwuegbu has been a force behind the concept of hosting dinners for underrepresented minority students who are applying to the College of Pharmacy and College of Medicine.

He has also been a face of NEOMED in Northeast Ohio and beyond, appearing in a video for the 2019 Cleveland International Film Festival that focused on an international theme of welcome.

Ogwuegbu, who holds a master’s degree in international relations, is currently working on starting a charitable organization in Nigeria, his country of origin, to provide medicine to those in need.