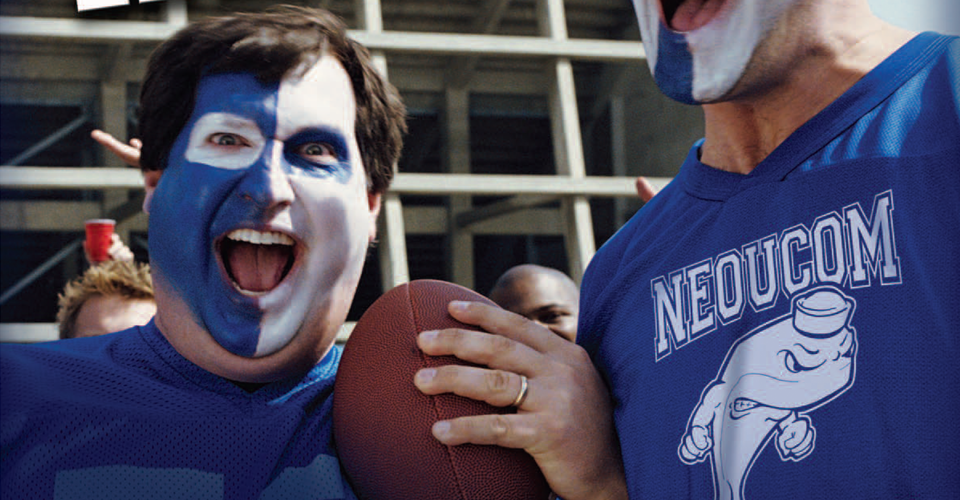 Gary Niehaus, Ph.D., may look like he’s always thinking about the next salmonella outbreak, but it turns out that he has other things on his mind as well: fantasy sports, namely, the NEOMED teams of his active imagination. As he knows, humor is one way to take a break from the serious matters in the world. Now and then, we all need to let our minds drift to something silly.

With that in mind, here are a few of Dr. Niehaus’s dream scenarios about the NEOMED sports teams that could have been. And if you don’t know what mumblety-peg is, look it up — you’re in for a surprise.

There was an unfortunate event in the mixed doubles mumblety-peg competition that left NEOMED’s star competitor limping. Bill (“Sticker”) Lynch said, “I thought his dark glasses and dapper white cane were just a fashion statement!”

Dean Young pointed out that faculty and sharp objects are always bad combinations.

Unfortunately, it appears that the University’s polo team may be in jeopardy. Team Captain “Spurs” DeLucia reports that students studying for Step 1 have been complaining about errant polo balls ricocheting off the Village walls. There also have been complaints that the mounts keep eating the produce in the gardens.

During last night’s competition, Bowling Green’s riders led 4 to 3 through chukka 4. The Whales’ Lee (rating 6) scored 2 during chukka 5 and the team held off Bowling Green in chukka 6 to win. After the match, Bowling Green complained that use of the Whale team donkeys was an infraction of the speed rules.  On the plus side, everyone has been complimentary about the lush, green pitch…though odor has been mentioned.

Bowling over the crowd

Whales Cricket  37 for 6; Python Cricket 38 for 20. No one is quite certain who won, even though Captain Darvesh spent an hour explaining the rules to the gallery as tea was served by the NEOMED Foundation.  A couple of observers nodded off when sticky wickets (illegal) were mentioned along with bowling and overs. The whole gallery retired to the clubhouse when Batsman Lecat complained that three runs were given as extras rather than awarded to him.

Social distancing was maintained throughout.

If you’d like to submit your own fantasy sports column for possible publication, send it to The Pulse. (The referees will choose. All decisions are final. Whiners will receive red cards.)

Here’s how: Go to thepulse.neomed.edu. Select NEWS BRIEFS above the search box. That will generate a screen with a green box that says “SUBMIT A NEWS BRIEF.” Select the box and fill in the form that appears.