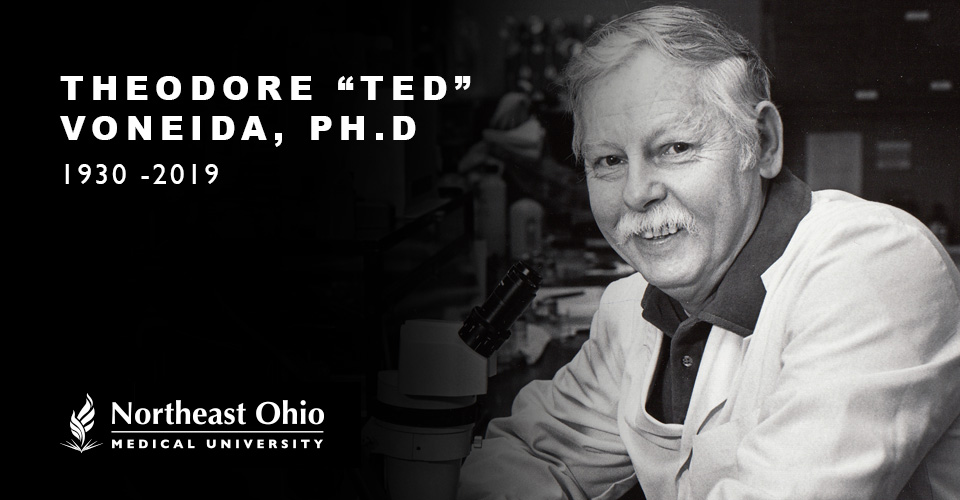 The NEOMED community mourns the death of Theodore “Ted” Voneida, Ph.D., our founding chair of the Department of Neurobiology, who passed away Sunday, Dec. 22, 2019, at age 89.

In July 1976, Dr. Voneida joined NEOMED ― then known as NEOUCOM ― as program chief and professor of neurobiology, becoming one of the first faculty hired.

Dr. Voneida received M.Ed. and Ph.D. degrees from Cornell University. He was a postdoctoral fellow in biology at the California Institute of Technology and a research fellow at the Institut de Neurophysiologie et Psychophysiologie in Marseille, France. He was also a professor in the Departments of Anatomy and Biology at the Case Western Reserve College of Medicine before joining NEOMED.

As passionate about educating medical students as he was conducting research, Dr. Voneida left a legacy for basic science researchers at NEOMED with whom teaching remains a huge part of their jobs.  In the late 1970s, he responded to a request from area grade school science teachers who wanted their students to see what happens in labs on campus. Students were invited to a morning study of the brain. The sessions were so successful that they grew to Science Days ― which continue in various forms today as part of the University’s pre-medical and pathway programs.

In 1996, Dr. Voneida was among the first faculty to be named a Master Teacher.

“Dr. Voneida had a profound influence on the development of NEOUCOM as a medical school, combining an unbounded enthusiasm for teaching medical and graduate students with innovation in the development of one the first departments of neurobiology in the U.S.,” said Jeff Wenstrup, Ph.D., associate dean of research as well as professor and chair of the Department of Anatomy and Neurobiology in the College of Medicine.

Dr. Voneida retired in December 1996 and was subsequently appointed Professor Emeritus in Neurobiology.

His commitment and love of teaching is recognized by NEOMED’s Ted Voneida Neuroscience Award for Outstanding Achievement in Medical Neuroscience. This year’s prize was awarded Monday, Jan. 6, 2020, to medical students Anna Kotowski and Divya Sharma.

Before accepting the position with NEOMED, Dr. Voneida informed University leadership of his social activism and his regular appearances on a weekly radio show called, “The Other View.” His views were not always popular and he was once banned by the National Institutes of Health.

His work to combat the environmental effects of strip mining in Southern Ohio was recognized by President Jimmy Carter in a White House ceremony.

Dr. Voneida and his wife were recently honored by the creation of the Ted and Swanny Voneida Social Justice Award by the Universalist/Unitarian Church of Kent Social Justice Council.

There will be a memorial service at 10 a.m., Monday, Jan. 20 at the United Church of Christ in Kent, Ohio.

We extend our fond memories, appreciation for his great legacy at NEOMED, and condolences to his family.