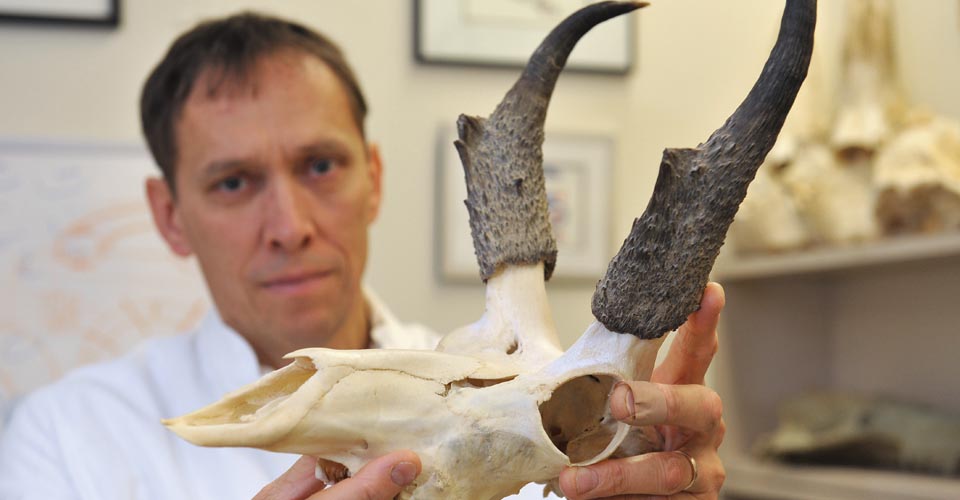 Bio-Med Lower Academy’s eighth-grade class had an exciting addition to their school day on January 16. Hans Thewissen, Ph.D., Ingalls-Brown Professor of Anatomy, added to their evolution lesson with his presentation on the walking whale. Activities such as playing a version of Spot the Difference, where students pointed out the evolutionary differences between sharks and whales, and conversations about why some whales developed filter feeding and some have teeth, added new context to their previous discussions of evolution.

Dr. Thewissen even went into a discussion of echolocation in whales and how the skull plays a role in that process. While Dr. Thewissen was presenting, his intern, Bailey McKenna, who is a senior at the Upper Academy, laid out baleen plates (which filter the food whales eat), a dog skull, dolphin embryos, and various whale bones for the students to interact with. Upon calling the baleen plates ‘feathers,’ one of the students remarked, “That’s the biggest feather I’ve ever seen,” noting that the plate was bigger than McKenna’s entire body. Dr. Thewissen’s research and explanations gave the eighth graders a real-world application of what they are learning in school and an interesting answer to the question, “So, what did you do today in school?”