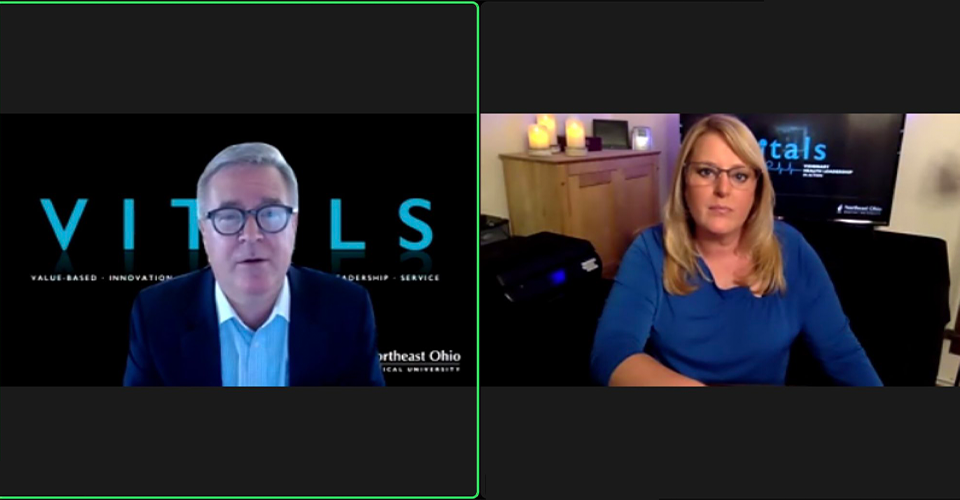 Know the symptoms of a stroke and know where to go for specialized help, because every minute counts – and stroke is the leading cause of disability in the United States.

That was takeaway advice from Mark Paul, president of Stryker Neurovascular, who appeared Thursday, Dec. 3, on the VITALS (Visionary Thought Leadership in Action) webinar series launched this year by NEOMED and moderated by Monica Robins, senior health correspondent for WKYC in Cleveland.

Paul focused on new technology and the process of measuring its value as he explained how a process called a thrombectomy delivers value to stroke patients and hospital systems alike.

His VITALS presentation also left the audience with the action steps above. Leave a note on the fridge, Paul advised, with information to protect yourself and your loved ones from stroke.

President Langell introduced the guest speaker, who discussed the documented positive impact of the procedure called a thrombectomy.

Most people have heard of two kinds of stroke, said Paul. One (called a hemorrhagic stroke) behaves  like a leak in your vascular plumbing, while the other, called an ischemic stroke – much more common,  affecting about 800,000 people in the U.S. each year – is a clot that clogs up the vascular system.

With new medical technology, physicians can remove a clot by inserting a catheter and retrieving the clot – a minimally invasive process called a thrombectomy.

It typically takes around six years of research and development and then the long, careful process of clinical trials to make sure that new medical technology can be completed, said Paul. Because the cost of a procedure like a thrombectomy is expensive (reflecting the high cost of development), companies such as Stryker must prove not only that they are providing clinical value (in other words, that the process aids patients) but also helps to bring health care costs down, overall.

Paul noted that a clinical review called the Mr. Clean study was conducted with 500 patients in The Netherlands. An article published in the New England Journal of Medicine in January 2015 reported, “In patients with acute ischemic stroke caused by a proximal intracranial occlusion of the anterior circulation, intraarterial treatment administered within 6 hours after stroke onset was effective and safe.”

So, with those positive findings, is thrombectomy becoming the standard of care?

To answer this question from moderator Monica Robins, Paul noted that in the time since the Mr. Clean study was completed, the number of comprehensive stroke centers [designated as Thrombectomy-Capable Stroke Centers by the Joint Commission in collaboration with the American Heart Association and American Stroke Association] has risen to about 200 in the United States.

Paul left the audience with a final reminder of the acronym FAST, which the American Heart Association and American Stroke Association developed to help identify if a person in distress is having a stroke. In addition, he recommended that everyone research to find out where the nearest comprehensive stroke center is located, since this higher level of care is needed to treat an ischemic stroke.

The clock is ticking when someone is having a stroke, because for every minute as it’s happening, two million brain cells can die, never to be replaced. Posting a written reminder in an obvious place, like your refrigerator, means that if an ambulance comes to your home, its driver can be directed to a comprehensive stroke center.

Even if your nearest hospital doesn’t have this elevated level of care, it’s still important for an ambulance to transport you to a hospital as soon as possible, said Paul, so they can obtain a consultation if it’s needed, to provide the best possible care.

Akram Boutros, M.D., president and CEO of MetroHealth Cleveland, will speak on the next VITALS webinar, scheduled for 5 p.m. Thursday, Jan. 14, 2021.