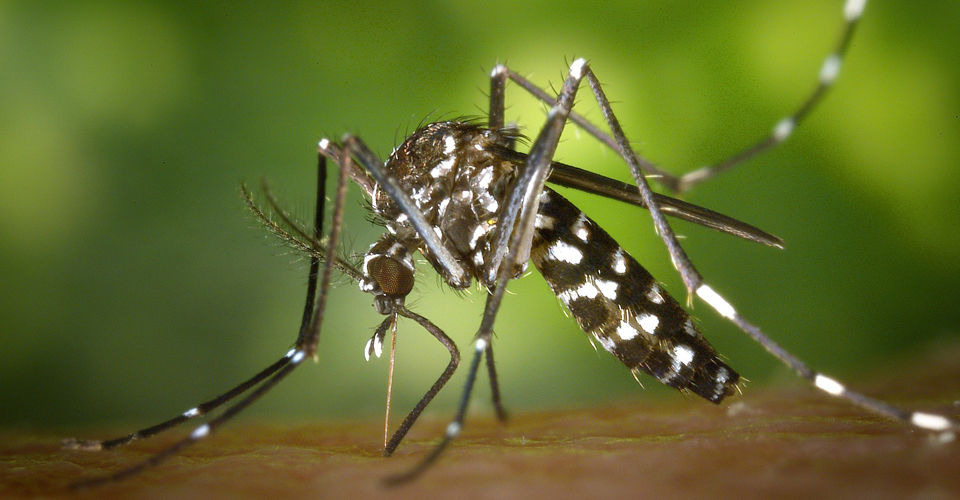 A recent public service announcement noted that West Nile Virus had been identified in Edinburgh Township Park, near NEOMED.

The news sent us to Angelo DeLucia, Ph.D., a faculty expert, for a Q&A on the topic. Dr. DeLucia, associate professor of molecular virology and cancer biology, teaches students about viruses that are carried by mosquitos, such as Zika, Dengue and West Nile.

Did you start scratching, just reading that sentence? Wait, this is important stuff. Read on for Dr. DeLucia’s practical advice, along with some little-known facts.

Q. What is West Nile Virus?
A. West Nile virus is an infectious virus transmitted by mosquitos. It is named for the West Nile River, because it was first discovered in a West Nile district of Uganda. The virus is thought to have been carried to North America by migratory birds. It quickly moved across the United States from New York City.

Q. How do I know if I have it?
A. Most individuals infected by the virus do not suffer any overt symptoms. Typical symptoms are acute onset of fever, headache, fatigue, muscle pain and muscle weakness and people with these symptoms usually return to normal within three to six days without any permanent damage.

But in rare cases, the virus can infect the brain, causing paralysis similar to polio. If other brainstem cells are infected, the resulting diaphragm and lung muscle paralysis can result in death. In severe cases, symptoms of profound muscle weakness can last several months. The Centers for Disease Control and Prevention says that about 1 out of 150 people who are infected "develop a serious, sometimes fatal, illness."

Q. Who is at greatest risk?
A. People older than 50 and people with underlying diseases are at the greatest risk. That could include organ transplant recipients, people with cancer, and other immunocompromised individuals.

Q. How do people catch it—and how can I avoid catching it?
A. West Nile stays in our environment by living in infected birds (especially crows and blue jays) and is carried by mosquitoes to uninfected birds and humans.

By the way, the term “dead end host” is applied to humans and horses in this case because once the virus has entered a human or horse, the virus doesn’t increase enough to be picked up by mosquitoes and carried to another human or horse. In other words, mosquitos can’t carry the virus from one person to the next.

Not getting bitten by an infected mosquito is the best way to avoid West Nile virus infection and disease. Use insect repellents that contain DEET, and wear long-sleeved shirts and pants if you’re going to be in places where large numbers of mosquitoes are found, such as woods in early mornings or early evenings. Or, avoid those locations at peak mosquito feeding hours. Having public health officials reducing the number of mosquitoes by using pesticides may not be welcome for ecological reasons, but it may be necessary to save lives.

Q. What can be done if I do get it?
A. The treatment for serious cases is supportive hospital care. Although a vaccine is available for horses, the vaccine for humans has just entered its first clinical trial.

Q. Why are we reading more about West Nile this year?
A. There are generally two explanations. The first is that a few years ago, a more virulent (potent) strain of the virus was discovered to be circulating within the country. The second is that immunity within birds and humans in our area is waning, thus permitting the virus to infect more individuals. Both ideas are currently being studied to understand the recent increase in virulence (intensity) and transmission.