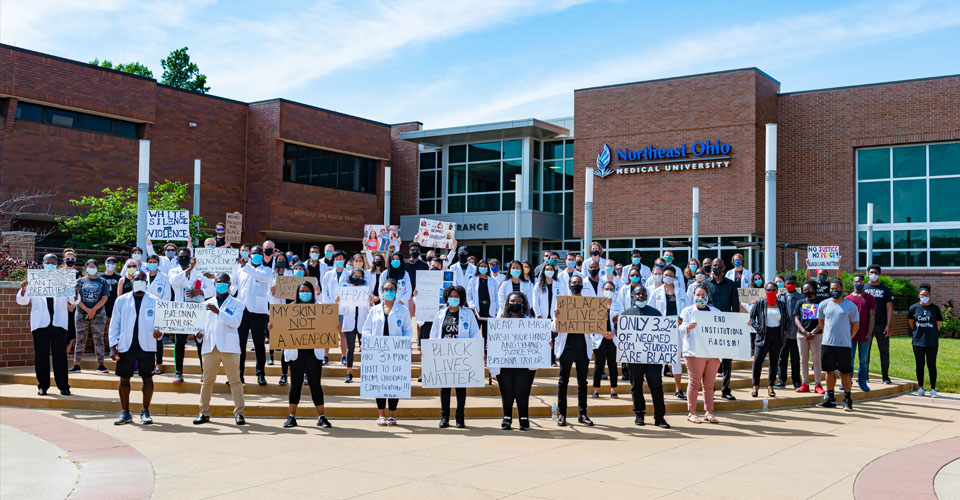 White Coats for Black Lives is a national student-run organization that started in 2014 following the police-involved deaths of Michael Brown and Eric Garner. The goal of this organization is to dismantle institutional racism and to collaborate with allies concerning racial injustices in medicine.

The White Coats for Black Lives protest at NEOMED consisted of over 50 students, staff, faculty, friends and family. In solidarity with the memory of George Floyd, his family and the BLM movement, we knelt for eight minutes and forty-six seconds. During this reflective time, we relived Mr. Floyd’s last moments – suffering under the weight of four police officers, pleading for air and calling for his mother. However, we rose with a renewed resolve to ensure that Black and brown people are treated equitably! We also had the honor of having Mary Massie-Story, M.D., clinical assistant professor in the Department of Family and Community Medicine and a family medicine physician at  MetroHealth in Cleveland, as our keynote speaker. Dr. Massie-Story fearlessly shared her personal experiences and lingering concerns of racism today. She utilized historically dark context to illuminate the present in the construct of institutional racism via HeLa cells (the cervical cancer cells infamously taken without permission from an African-American patient named Henrietta Lacks), imprisonment of Blacks and systematic racism in medicine.

As health care professionals we take an oath to respect, protect and advocate for all patients. We are in a unique position to serve all patients, and we are ethically obligated to treat each one with respect and dignity! The great American poet Maya Angelo once said, “Nothing will work unless you do.” This fight is not over; our endeavor does not end with this protest. Actions must be taken, and work must be completed.